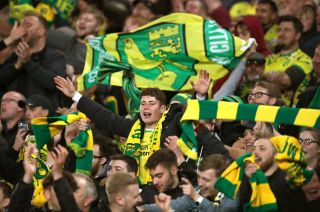 Norwich will meet with fan group representatives to tackle issues raised by a new membership scheme which has been labelled as a “tax on loyalty”.

The Canaries are set to open the 2019-20 Premier League season away at European champions Liverpool on August 9, the game broadcast live.

Following promotion back to the top flight, the Norfolk club recently announced a new pricing structure for home match tickets.

A cap of £30 was set for general admission, but Norwich also revamped the membership scheme to address the expected demand, especially for away games.

The tiered system, which costs between £35 and £50 for staggered access to sales windows for home and away fixtures sold separately, has come in for criticism from disgruntled Canaries supporters and season ticket holders.

The strong bond between fans and Daniel Farke’s young squad was cited as key to last season’s Championship title success.

A lengthy joint statement on behalf of supporter groups Along Come Norwich, Barclay End Norwich, Canaries Trust, Forces2Canaries and Proud Canaries called on the club to rethink the new policy.

“Many have approached us to say that they see this as a tax on their loyalty, a ransom to be paid to keep their rightful place at the top of the allocation scheme, and we agree that this scheme has been unfair in wiping people’s loyally attained points overnight,” the statement read.

“The feeling is that this scheme has damaged the bond between the club and the fanbase.”

On Thursday afternoon, Norwich responded with a brief statement, confirming talks would take place to try to tackle the concerns.

“The club will communicate with supporters following a meeting with fan group representatives later next week to discuss the matters raised.”

Norwich are closing in on a £3.25million deal for Motherwell’s Scotland Under-21 international David Turnbull as they continue to prepare for life back in the top flight.