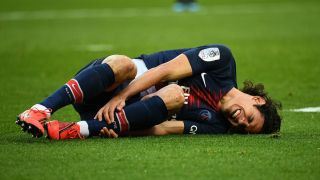 Edinson Cavani gave Paris Saint-Germain an injury scare ahead of their Champions League clash with Manchester United despite scoring in Saturday's 1-0 victory over Bordeaux.

Unlike Angel Di Maria, Julian Draxler and Kylian Mbappe, Cavani started at the Parc des Princes but he only lasted 45 minutes before hobbling off.

The loss of Cavani seemed to affect PSG after the restart as they struggled to re-assert their dominance, Gianluigi Buffon needing to make a number of saves to ensure their lead at the top of the Ligue 1 grew to 13 points.

Thomas Tuchel made seven changes from the side beaten at Lyon last weekend but it did not affect their rhythm, and Thiago Silva should have put them ahead early on but his shot was cleared off the line by Pablo.

While Silva was unlucky, Cavani was wasteful when played in by Marco Verratti, the Uruguay international controlling the chipped pass well before hooking his left-foot shot well wide.

Eric Maxim Choupo-Moting was denied at point-blank range by Benoit Costil as PSG began to apply pressure, the forward unable to convert from Christopher Nkunku's run.

With half-time looming PSG finally took the lead, Meunier fouled by De Preville and Cavani making no mistake from the spot.

46' First substitution of the game for @PSG_English as @KMbappe replaces goal scorer @ECavaniOfficial for the second half. #PSGFCGBpic.twitter.com/PuQiOBVRCt— Paris Saint-Germain (@PSG_English) February 9, 2019

It was Cavani's final action as the striker limped off with a muscle injury, Mbappe coming off the bench to replace him at the start of the second period.

PSG were lucky to still be ahead just before the hour when Younousse Sankhare created space for Francois Kamano, but the forward ballooned over from 18 yards much to the relief of the home defence.

Buffon then made a superb save to deny Kamano's next effort and PSG withstood some late pressure before their return to winning ways in the league was confirmed.

What does it mean? All eyes on Cavani

While the win extends PSG's lead at the top of Ligue 1, they may come to rue starting Cavani if he misses the midweek trip to Old Trafford. Tuchel will hope removing him at the break ensured he will be fit to feature as they look to keep their European dreams alive.

Dani Alves has established himself as one of the best full-backs in the world during his illustrious career, but he showed another string to his bow on Saturday. Deployed in central midfield, the Brazil international was PSG's heartbeat alongside the returning Verratti – who played 58 minutes.

There was no need for Tuchel to risk Cavani from the start, and his decision to play the forward backfired. Now he will hope it is nothing too serious.

PSG travel to Manchester for the first leg of their last-16 tie with United before returning to league action at Saint-Etienne next weekend, when Bordeaux will host Toulouse.