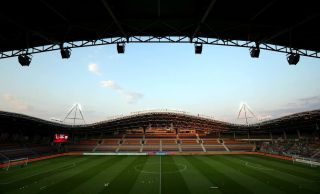 The head of the global football players’ union Fifpro has said it is “frankly not comprehensible” that football is continuing to be played in Belarus despite the coronavirus crisis.

Belarusian president Alexander Lukashenko has vowed to resist social distancing measures despite the country reporting its first death from the virus on Tuesday, and a surge in confirmed cases to 152.

Fifpro general secretary Jonas Baer-Hoffmann said: “We’re appealing for it to be taken with the same cautionary measures that have been taken in the rest of football.

“It is frankly not comprehensible how this could be going on.”

A full Premier League programme was played in Belarus last weekend and the next two matches are scheduled to take place on Friday in Minsk and Bobruisk respectively.

Lukashenko played in an ice hockey match last week and reportedly claimed drinking vodka and taking a sauna was a way to beat the virus that has now killed over 40,000 people worldwide.