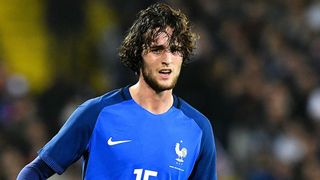 Adrien Rabiot hopes his first France appearance will prove to be "the beginning of an adventure" after debuting against Ivory Coast on Tuesday.

The Paris Saint-Germain player made his Les Bleus bow in a 0-0 international friendly in Lens.

And although he limped off in the 78th minute, the midfielder was delighted to represent his country at senior level for the first time.

"This evening, there was a lot of emotion, I was very happy with this first selection, everything went well until my injury," he said.

"I hope that this is the beginning of an adventure, and I must continue on that path.

"My coach [Didier Deschamps] asked me to do what I do in the club. It's easy, it's a good group."

Another man relieved to be on the pitch at Stade Bollaert-Delelis was Lyon forward Nabil Fekir, who is back in the international set-up after a serious knee injury ruined his hopes of featuring at Euro 2016 on home soil.

"It's not easy to get everything back quickly, but I do not have to worry about it, I feel good about it, and I try to give the best of myself for the team," he said after replacing Ousmane Dembele at half-time.

"Tonight, we unfortunately failed to score ... we have to get back to work ... I have no apprehension about my injury [and] I tried to play with freedom."

Captain on the night Raphael Varane was frustrated not to be able to break down Ivory Coast but remains optimistic about the team's future under Deschamps.

"There was a lack of rhythm … and we were faced with a team that was well-organised tonight, with a lot of physical strength. They were strong in the tackle, and we lacked creativity," he said.

"We cannot play every game at the highest level, we will remember a lot of positives this year.

"It was a great year, we will continue to grow, we have young players who are maturing and the group has a lot of potential."