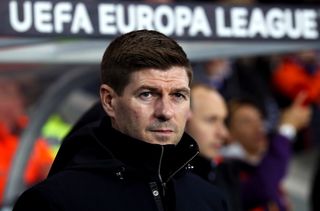 Steven Gerrard has vowed Rangers will battle to the end as they look to salvage their Europa League campaign in Germany on Thursday.

The Ibrox men kicked off the new Scottish Premiership season with victory over Aberdeen on Saturday, but they still have last season’s European campaign to complete after emerging from lockdown.

They head to the BayArena trailing Bayer Leverkusen 3-1 from March’s last-16 first leg – but Gerrard still retains hope that Gers can progress to the quarter-finals.

He said: “We respect the scoreline but while we’re representing Rangers we’ll fight to the end.

“If we can’t qualify, we want to win the game on Thursday.

“We want to go there and show everyone we’re capable of playing at that level.

“We’ll play the game in isolation and try to give a good account of ourselves.”

The Light Blues will travel with confidence after Ryan Kent’s goal got them off and running with a 1-0 win behind closed doors at Pittodrie.

Rangers dominated the first half but did get it their own way after the break.

🎥 REACTION: Steven Gerrard spoke to @RangersTV after today's victory as he spoke about the fitness levels of the team and @LeonBalogun's impressive performance. pic.twitter.com/1Q794rm1LQ— Rangers Football Club (@RangersFC) August 1, 2020

But Gerrard was pleased to see his side pick up just their fourth win in 11 attempts against the Dons under his watch.

He said: “We’ve been back for six or seven weeks, we’ve won five games and kept five clean sheets.

“I didn’t see (the empty stadium) affecting us.

“At times we didn’t look as nice on the eye – but we’re not always going to be able to do that. The important thing is that we don’t concede goals or let teams take points away from you.

“We’ve been here many times and we’ve allowed Aberdeen to get back in the game. Last year we were 2-0 up and had similar periods of the game where we conceded.

“On Saturday we never and that’s the most pleasing thing for me, not the 1-0 win.

“It’s about defending well enough and doing what you need to do to get over the line.”

Derek McInnes admitted his team lacked a focal point after being forced to start with youngster Bruce Anderson in place of injured strikers Sam Cosgrove and Curtis Main.

But the Reds boss has high hopes for 19-year-old forward Ryan Edmondson, who was given a late run out 24 hours after agreeing a six-month loan move from Leeds.

He said: “Ryan does score goals at his own level, he is highly thought of at Leeds, he will be signing a new contract there in the next few weeks.

“We are delighted to get him. He is young and he is raw at times, but he has got potential and he gives us something a bit different.”