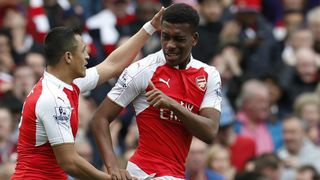 Alex Iwobi has thanked England for their attempts to persuade him to play for them over Nigeria and described his decision to turn them down as "difficult".

The 19-year-old made his Arsenal debut last October and has gone on to make 16 appearances in all competitions as well as breaking into the Nigeria squad at international level.

Iwobi revealed that England had contacted him in an attempt to get him to represent them having played for the Three Lions at youth level, but he ultimately chose Nigeria - the nation of his birth.

"It was a difficult decision picking Nigeria over England," he told Arsenal's official website.

"England did contact me recently before I played my first competitive match for Nigeria, asking if I wanted to play for England.

"I'm very proud to represent Nigeria but I would like to say thank you to England for the chance they gave me, it was a difficult decision.

"The love Nigeria showed me, when I played for them in a friendly, the fans were just crazy. The fans almost eat you up because they love you so much. I'm enjoying playing for them.

"When you are getting out of the airport there are fans already there screaming 'Arsenal, Arsenal. Gunners for life!' and it's just mad.