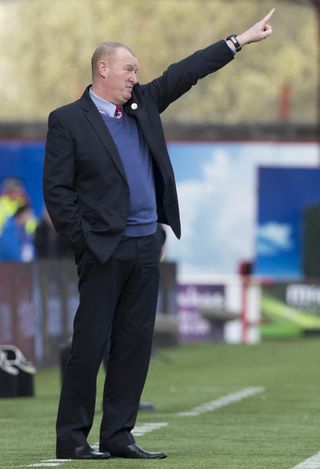 Hamilton head coach Brian Rice expects a response from his players after some frank discussions in the wake of their Lanarkshire derby let-down.

Accies travelled to Fir Park last weekend buoyed by an away win at Aberdeen but were one down against Motherwell inside three minutes and three down by half-time with no way back.

And Rice has made it clear the players cannot make the same mistakes when they host Hearts on Saturday as they bid to stay out the Ladbrokes Premiership bottom two.

“There’s no doubt it was a couple of steps back last week,” Rice said.

“I don’t think I have ever been as angry after a football match, because we shot ourselves in the foot. Simple as that.

“We beat ourselves and with it being a local derby it was  massive game for us and we let a lot of people down.

“That can’t happen again. We emphasised that and spoke about it.

“We watched the first half, I wasn’t bothered about the second half, the game was done in the first half. We watched that and spoke through it, the players saw the mistakes they made and we discussed it. I wanted their views on it, it’s not one way. So it was a good frank discussion.

“We beat ourselves. Don’t give away easy goals, don’t give away things cheaply, be resilient, be hard to beat, and it didn’t happen last week for us. So I’m looking for a response.”

Hearts have won two games in a row with powerful striker Uche Ikpeazu proving a handful and getting his first goal in more than six months during the midweek cup win over Partick Thistle.

But Rice wants Hearts to be worrying about his players more than he is concerned about Ikpeazu.

When asked how they deal with him, Rice said: “We just have the ball more than Hearts, and be organised when they have got the ball.

“We know what Hearts’ strengths are and the big man has been brilliant for them. He is a focal point for them, he is the out ball for them, and he’s scoring goals.

“George Oakley is a focal point for us, and out ball for us and he’s scoring goals. So Hearts can worry about him.”