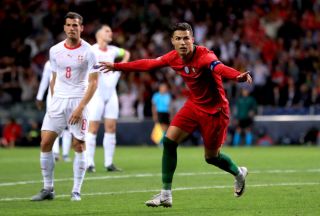 Juventus forward Ronaldo opened the scoring at the Estadio do Dragao with a fine free-kick after 25 minutes.

Switzerland, though, equalised through a controversial penalty in the 56th minute, after German referee Felix Brych had initially awarded a spot-kick to Portugal for a foul on Bernardo Silva.

The official, though, went back to check a previous incident in the other area when Nelson Semedo had nudged Steven Zuber.

Following a long delay, while he watched replays on the pitchside monitor, Switzerland were given a spot-kick, which AC Milan defender Ricardo Rodriguez converted.

Ronaldo, however, had the final say when he struck twice during the closing three minutes to complete his treble with two brilliant low finishes past Yann Sommer.

England or Holland will await in Sunday’s final at the same Porto venue.

“In terms of adjectives to describe Ronaldo’s game – I have used many,” Santos said at a post-match press conference.

“I was his coach in 2003 and I could see where he would go. He is a genius. There is genius paintings and sculptures and he is a football genius.

“When someone scores three goals, they are the difference maker.”

Santos continued: “It was a tough game, it was well played – two sides who are very strong, playing to win.

“They are strategically well organised, changing their formation.

“We were anxious on the ball and I tried to fix this at half-time. The side improved towards the end of the game.

“They are skilled players who need the ball at their feet to show their quality.”

On the penalty controversy, Santos said diplomatically: “I am an advocate for VAR, I think it can be very helpful.”

Switzerland, who finished ahead of World Cup runners-up Belgium in their group, had chances – notably early in the first half for Xherdan Shaqiri and also when Benfica forward Haris Seferovic saw his hooked shot clip the crossbar.

Liverpool midfielder Shaqiri told uefa.com: “We were the better team, for sure, but Ronaldo decided the game. This is football sometimes.

“We can’t always play well and lose. We have to learn from our mistakes and do better next time.”

Switzerland boss Vladimir Petkovic added: “Congratulations to Portugal. They had street smarts, they had the cherry on top of the cake and that made the difference. Four shots, three goals.

“On the one hand we were up against a very strong opponent, but over 90 minutes we showed we are a strong team and that we can make life for a top side difficult too.”