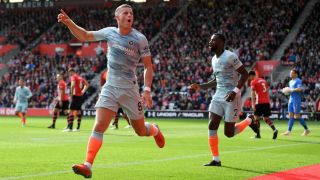 Ross Barkley has the quality to become a "great player" for club and country, according to Chelsea manager Maurizio Sarri.

Barkley, who was recalled to England's squad for the upcoming UEFA Nations League fixtures against Croatia and Spain, scored his first Chelsea goal on Sunday, as the Blues moved, temporarily at least, to the top of the Premier League with a 3-0 win at Southampton.

The former Everton man also claimed an assist, setting up Eden Hazard for the opener, and Sarri – who has shown faith in Barkley since taking over at Stamford Bridge – insists the former Everton midfielder has the potential to become a key figure for Chelsea and England.

"Potentially he is a great player," Sarri told a news conference.

"He has quality, very important ones in the physical and technical [aspects], now he is improving in the tactical point of view.

"He can be a very important player in England and for the national team.

"I spoke to him from the first day that he has great physical and technical quality. Now he has improved."

1 – Ross Barkley is the first Englishman to both score and assist in a Premier League game for Chelsea since Frank Lampard in December 2013 vs Sunderland. Rise. October 7, 2018

Sarri's side are still unbeaten, but the former Napoli boss reiterated his belief that Chelsea are not yet ready to be labelled as Premier League title contenders.

"It's the same that I thought one week ago. I think Manchester City and Liverpool are a step forward," Sarri added.

"Now we are trying to cover the gap and we are working on that. I think it will be very difficult to cover so large a gap in one season.

"I think sometimes, not always, we can do better, they had two or three opportunities. We need to be in control of the matches."

Sarri's assessment was not shared by Southampton boss Mark Hughes, however, whose side sit two points above the relegation places.

"They will always be contenders, we've been beaten 3-0 by them today, I’m not going to change my mind," Hughes said.

"They're an outstanding team."