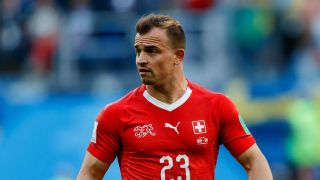 Stoke City winger Xherdan Shaqiri is hopeful he can remain in the Premier League.

Shaqiri scored eight goals in the 2017-18 season but was unable to prevent Stoke from dropping down to the Championship.

The 26-year-old former Bayern Munich man bowed out of the World Cup on Tuesday after Switzerland lost 1-0 to Sweden in St Petersburg, putting his club future back into focus.

"At the moment, I can't say anything. You are going to hear soon on my future," said Shaqiri, who has been linked to Liverpool, as well as a reunion with former Stoke boss Mark Hughes at Southampton.

"I was not thinking about this because I was just focused on my national team and wanted to make a good tournament for my team and my nation. It's pretty normal to be aware of clubs being interested.

"I don't know, it's not dependant on me sometimes. Of course, I would like to play on the biggest stage in football. Everybody knows that.

"I hope I can stay in the Premier League. I hope so, you never know with football. I don't rule out anything."