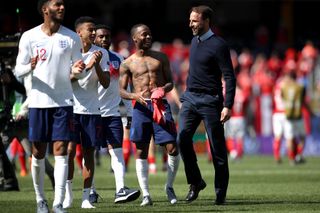 Gareth Southgate believes his group made a mental leap at the Nations League as England’s attention turns to Euro 2020 glory.

Jordan Pickford was the penalty shoot-out hero against Switzerland on Sunday as the Three Lions prevented the inaugural finals ending in deflating fashion, just three days after Holland came back to win their semi-final 3-1 in extra-time.

It was England’s second penalties triumph in the space of a year and victory saw them improve on last year’s fourth-place finish at the World Cup, with Nations League bronze medals acknowledgement of the progress being made.

Southgate knows they hit a “certain level” on the field in Portugal and need to kick on, but England’s manager has been impressed by the group’s winning mentality and hunger.

“I think, for me, the significant step is the level of disappointment that we haven’t left here having gone to the final and won the trophy,” the former defender said after the 0-0 draw with the Swiss was followed by a 6-5 penalty shoot-out win in which Pickford scored before saving from Josip Drmic.

“And that took, I have to say, some lifting over the last couple of days for everybody because none of us were satisfied.

“We think we played fine on Thursday but made ridiculous mistakes, so it was important that we responded with a high level of performance.

“The players adapted really well, we changed the shape, and they carried that out really well and we should have won the game.

“We deserved to win the game with the opportunities we created and the number of times we hit the woodwork so the healthy thing for me was that it was a good response.

“Some really good discussions over the last couple of days about our dissatisfaction with only getting as far as we have, and a real determination for all of us that we recognise now that you don’t get many opportunities as an international team and we need to make sure that we really strive to take the next step over the next couple of years.”

Euro 2020 looks a fantastic opportunity for England, with the squad full of talent and the tournament ending on home soil.

Preparations should certainly be easier than for the Nations League, with the Champions League finalists arriving just two days before the Holland loss.

“It’s been a fascinating few weeks really, because I’ve never known such a complicated period of players’ availability and preparation,” Southgate said.

“The last two days were fascinating in that whenever you lose a big game, there’s all sorts of theories and regret and emotion and that all needed pulling together.

“But fundamentally what underlied everything was the desire for the players to respond, and the realisation that none of us were satisfied with two semi-finals. We all wanted to move forward further.

“The fact that we, as a group, owed it to ourselves, owed it to the 98 per cent of fans who’ve supported us incredibly, and to see so many of them here and the support they gave was brilliant. So that was what pleased me.”

Southgate has some thinking to do over the coming months as he prepares to start the 2019-20 campaign with fresh impetus and issues ironed out.

The error-strewn display against Holland showed the issues of playing out from the back, while on Sunday their profligacy in front of goal nearly cost them as they failed to score from open play in Portugal.

“I think we’ve created some really good chances,” he said.

“I mean (Ross) Barkley has played some fantastic through passes, he passed for Jesse (Lingard)’s goal that was disallowed the other night, he passed for Trent (Alexander-Arnold) today.

“I think we’ve looked a threat in open play over the last 12 months. We scored goals in Spain that way.

“So, I think we’re improving as an attacking threat, and part of that is (because of) players that are emerging and gaining confidence, and part of that is consistency of playing together and the understanding of what’s needed to open teams up who defend in such depth.”