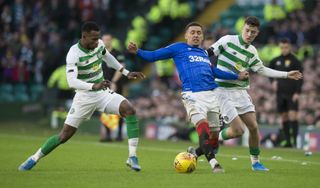 The Scottish Professional Football League announced it had agreed terms with the broadcaster on a new package to screen 48 games next season, and had spread the cost of a rebate for fixtures not completed in the curtailed 2019-20 season across the term of a new five-year contract.

It is hoped the new virtual season tickets will provide clubs with an alternative source of matchday income as football resumes behind closed doors.

The virtual season tickets will be sold via clubs, who will set their own pricing levels. They will be available for as long as games remain behind closed doors amid the coronavirus pandemic.

SPFL chief executive Neil Doncaster said: “This is an innovative and pragmatic solution to the challenges posed by Covid-19 and I’m grateful for the flexibility shown by our clubs and by Sky Sports.

“This agreement means that any liability for games not delivered during season 2019/20 has now been settled, on terms that reflect Sky’s status as a committed partner and supporter of Scottish football.”

“We want our fans to stay as close to the Club and be part of everything we do. It is imperative we cater for the needs of our supporters. These proposals are great news."— Celtic Football Club (from 🏡) (@CelticFC) June 3, 2020

Last month, Celtic were confirmed as champions for the ninth consecutive year as it was determined the season would not resume, with clubs having either eight or nine fixtures left to play at the time of the decision.

In a statement, Celtic welcomed the initiative and will reveal their own specific access arrangements within the coming days.

Celtic chief executive Peter Lawwell said: “Until we can welcome our fans back, we want our fans to stay as close to the club and be part of everything we do.

“It is imperative we cater for the needs of our supporters. These proposals are great news.

Rangers will update supporters in due course on a number of topics of interest but we are in a position to confirm that season ticket holders will be granted complimentary access to all home games streamed via RTV as a result of those matches being played behind closed doors.— Club 1872 (@Club1872rfc) June 3, 2020

“The access will be available while social distancing measures prevent fans from attending matches and will mean that our season ticket holders, exclusively, will be part of every SPFL home game.”

The official Rangers supporters’ group, which is also one of the club’s biggest shareholders, also issued a tweet confirming that season ticket holders will be granted “complimentary access” to all home games streamed via RTV.

Reports in Scotland said the loss of those remaining games from the curtailed season could have cost the SPFL up to £5.5million, but that Doncaster was seeking to negotiate a much-reduced penalty of around £1.5million to be paid over the course of the five-year deal. None of the figures involved have been confirmed.

Aberdeen chairman Dave Cormack suggested that a package to include away games was being looked at, hinting at wider discussions across the league, and offered some optimism about gates reopening before the end of the year.

“Under this deal AFC will be able to offer virtual access to season ticket holders for all closed-door home games and will continue to work with our colleagues at fellow Premiership clubs to explore potential arrangements to show away games,” said Cormack.

“We’re really excited about getting back to training later this month with a view to closed-door games kicking off at the start of August and, whilst we appreciate we are operating under ever-changing circumstances, we’re preparing, and hoping, to return to Pittodrie with partial crowds from November or December and full crowds in January 2021.”