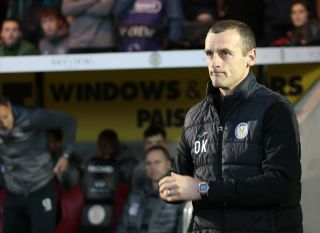 The St Mirren squad remain in the dark over Oran Kearney’s future after returning for the first day of pre-season training without their boss.

There was no sign of the manager at the club’s Ralston training base as the Buddies reported back after their summer break.

Reports over the weekend claimed the Northern Irishman had been told to stay away from the club following a row with Saints chairman Gordon Scott over his plans to continue commuting across the Irish Sea from his family home in Ballymoney.

The Saints faithful are now waiting on a statement clarifying the 40-year-old former Coleraine boss’ situation but he is not expected to be in charge for much longer.

While Kearney was absent, it was left to sports scientist Junior Mendes to take training as the first-team squad were put through a series of fitness tests.

Youth chief Allan McManus and goalkeeping coach Jamie Langfield were also on hand after arriving shortly after 8am to meet with technical director Gus MacPherson.

But with Scott in America on business and chief executive Tony Fitzpatrick also overseas on holiday, there was no explanation given to the players for the manager’s absence.

As he left the training ground, midfielder Gary MacKenzie said: “There’s nothing to say at all. We don’t know anything. I don’t think there’s much to say. I don’t think anybody knows.”

Kearney, 40, signed a three-year deal when he replaced Alan Stubbs in September.

He successfully saved the club from relegation as he guided Saints to a play-off victory against Dundee United last month.

But his insistence on travelling to and from Northern Ireland each week has frustrated Scott.

Saints are due to face Kearney’s old side Coleraine on Saturday in a pre-season friendly, with the Bannsiders currently without a new manager more than six weeks after the sacking of his successor Rod McAree.

The situation with Kearney has also left defender Mihai Popescu in a state of limbo.

The Romanian spent the second half of last season on loan from Dinamo Bucharest and is due to return to his parent club next week.

Dinamo are demanding £350,000 to make the move permanent but with Kearney’s future unclear Popescu admits he has no idea as to his future.

The 26-year-old said: “We don’t know anything. We just came to training and now we wait.

“We can’t speak. We will have to wait to see what happens.

“Oran was a good person and I like him. But I don’t know anything so I don’t want to say something and it not be right.

“I hope to be here but my future is not sure here. I have the last week of my contract and I’ll wait to see if I’m here or not.

“It’s not 100 per cent certain I’ll still be here so the club will need to speak with Dinamo in Bucharest and see if I’ll stay.”