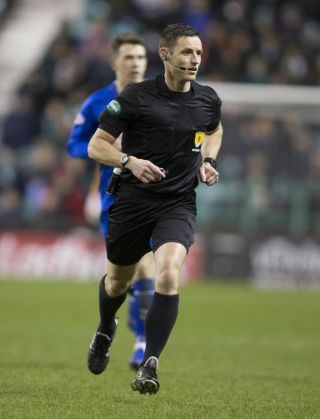 Steve Clarke insists Steven McLean should never referee a Kilmarnock game again after he sent off three Killie players in their 1-0 Ladbrokes Premiership defeat to Aberdeen at Rugby Park.

McLean is the son of former Killie defender Stuart McLean, who is in the club’s Hall of Fame, and Clarke feels that connection is affecting his ability to handle games involving the Ayrshire side.

McLean junior certainly had plenty on his plate in the fractious match which boiled over in the 36th minute when Killie defender Kirk Broadfoot was shown a straight red card for catching Dons keeper Joe Lewis in the face with his boot.

Aberdeen defender Scott McKenna headed in what turned out to be the winner from a Graeme Shinnie corner in the 66th minute before Kilmarnock defender Stuart Findlay was sent off for picking up the second of two yellow cards, for a foul on the Pittodrie captain.

In added time, Rory McKenzie was dismissed for a clash with Dominic Ball as the visitors’ narrow win took them above Killie into third place with four fixtures remaining and a Europa League place up for grabs.

Former Chelsea and Scotland defender Clarke, who will appeal against the red cards shown to Broadfoot and McKenzie, said: “I went over and congratulated him (McLean) and told him it was the worst performance I had ever seen in my career – and it is a long career.

“When we lost 2-1 to Hearts earlier in the season I mentioned the referee that night and it was Steven as well.

“And he didn’t control that game properly either.

“I feel a little bit sorry for him. People tell me historically that he has never been particularly kind to Kilmarnock.

“I think he feels the pressure of the fact that his father played so many games here. I really do.

“I have mentioned it a couple of times privately but publicly I am saying now, I think it would be better for Steven and Kilmarnock if Steven doesn’t referee any more games for us. Quite simple.

“There are loads of referees around that can cover.

“It is a big family connection. Stuart McLean was a top, top player here. I remember coming to watch him.

“A good right-back, not quite as good as me but decent! He played over 400 games for the club.

“And I feel that is a big enough connection  – and it is better for Steven.”

Dons boss Derek McInnes admits he took precautionary action with striker Sam Cosgrove who survived further punishment on a couple of occasions after he was cautioned for a foul on Killie skipper Gary Dicker.

Cosgrove was replaced with James Wilson at the interval.

“I had to get him off,” said McInnes who revealed Shinnie could be out for the last four games with an ankle knock.

“He was going in half-hearted and I thought about taking him off before half-time.

“It was important we kept 11 men on the pitch. I thought he got a raw deal today.

“We can all sense it, he was only one challenge away from getting sent off.”