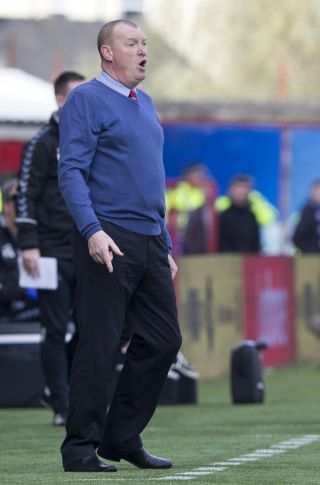 Lewis Smith marked his first start with a goal as Hamilton boosted their Betfred Cup Group F prospects a 3-1 win over Clyde.

Scott McMann and Blair Alston also opened their accounts for Accies to put them two up after Chris Johnston had hit the post for Clyde.

Kristoffer Syvertsen pulled a goal back for the Bully Wee, but 19-year-old Smith rounded off a fine performance by slotting into the bottom corner to clinch victory for Accies, lifting them to two points behind leaders Partick Thistle.

The game might have been played at Ochilview, with work ongoing at Broadwood, but Clyde looked right at home initially. Johnston almost scored but saw his 20-yard effort tipped onto the post by goalkeeper Owain Fon Williams.

Smith then produced a terrific effort, which brought out the best in David Mitchell, before he curled an effort narrowly wide minutes later.

Accies broke the deadlock in the 31st minute, when McMann drilled the ball low away from Mitchell after Ronan Hughes’ shot had been blocked.

They could have doubled their lead before the break, but Aaron McGowan’s powerful header was saved by Mitchell.

Brian Rice’s men did secure a two-goal cushion in the 50th minute, when Alston volleyed the ball into the bottom corner from the edge of the box.

Clyde were not to be deterred, however, and responded through Syvertsen, who finished off a lovely move involving Kieran Duffie and Johnston after 57 minutes.

The Norwegian almost restored parity with a drilled shot that Fon Williams clawed away.

However,  moments later, Accies academy graduate Smith extinguished Clyde hopes by surging forward and firing into the bottom with 14 minutes left to play.