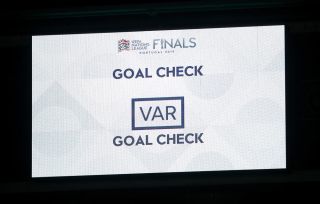 England’s teams experienced the highs and lows of VAR on Sunday.

Gareth Southgate’s men’s side saw a late goal in their Nations League third-place play-off against Switzerland chalked off for a foul before a penalty awarded for handball set Phil Neville’s women’s team on their way against Scotland.

Southgate’s side eventually clinched third place in the inaugural competition with victory in the penalty shoot-out. However, England thought they had snatched an 84th-minute winner through substitute Callum Wilson, only for VAR to spot his foul on Manuel Akanji. Dele Alli met a Raheem Sterling cross with a header that crashed back off the frame of the goal and Wilson reacted quickest to fire home from close range. But relief and joy soon became frustration, just as it had in the semi-final against Holland on Thursday when Jesse Lingard’s late strike was ruled out for offside.

The Lionesses made a winning start to their World Cup campaign in Nice, with VAR providing a helping hand. Nikita Parris put England ahead with a 14th-minute penalty, awarded after Fran Kirby’s cross struck Nicola Docherty on the arm. Czech referee Jana Adamkova watched footage back and pointed to the spot, with Parris firing in from 12 yards.