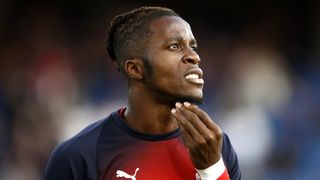 Roy Hodgson refuted suggestions Crystal Palace are psychologically vulnerable without Wilfried Zaha despite their continued struggles in his absence.

Zaha picked up an injury in training on Friday and was forced to sit out the 2-0 home defeat to Southampton.

Palace have now lost each of the last 10 matches the talismanic 25-year-old has missed, with the recurring issue exacerbated by Christian Benteke's wastefulness in front of goal.

Hodgson insisted the Eagles cannot afford to lean on Zaha's unavailability as an excuse for poor results.

"Yes, of course I am aware of [the record]. But I don't quite know what I can do about it, until such time as we play a game without Wilf and win," Hodgson told a news conference.

"Again he couldn't play today and again we didn't win, so it is a fact.

"It is a fact we have to learn to live with and we will continue to have to keep working hard to try and make certain that we put that fact and situation behind us, because there will be games when Wilf Zaha doesn't play, and I would like to think that we are good enough as a team, and as a squad, to win games without him.

"But I think it is too far fetched to think that because Wilf isn't able to play, it has some sort of effect on the rest of the players and means they can't produce the level of football which we think we can."

"When we missed the penalty it gave [Palace] a boost and a little bit of momentum that we had to withstand in the latter part of the game," the Saints boss said.

"In the end we have gone up the other end, scored a goal and seen the game out comfortably. We had to show different parts to our game, different qualities."