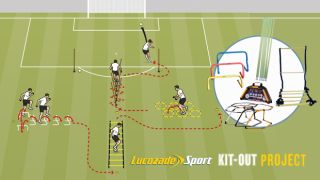 "This circuit (above) uses football agility drills to improve balance, body control, foot speed and co-ordination. It develops the neuromuscular system, which can improve an athlete’s ability to perform explosive multi-directional movements.

Agility is the ability to change direction without the loss of balance, strength or speed. Developing football speed and agility in training can help improve body alignment, help reduce your risk of injury, as well as train muscles to fire during explosive activities.

Elite footballers distribute power efficiently so they can execute actions sharply and at high speed. The circuit I have put together uses a collection of kit that challenges you to jump, shuffle, sidestep, twist and turn then fire the ball into the back of the net.

The quicker, more efficient you are, the more elusive you will be out on the pitch. Players like Lionel Messi can accelerate and turn away from defenders in the blink of an eye.

On the coach’s command, sprint towards the first station, perform lateral high knees over the mini- hurdles. Then sprint to the right, turning sharply around the end cone and completing the agility ladder with lateral steps. When you’ve reached the end run around the centre cone and turn to the right, sprinting around the far right cone and racing through the agility rings. Finally step through the slalom poles, dribble a ball around one of the end poles and strike at goal.

Time yourself performing the drill and see if you can get faster. You can add elements to the circuit and perform it wearing a weighted vest.