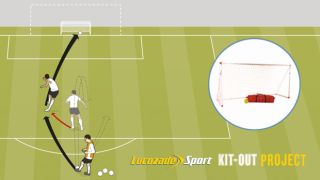 Get your brain, feet and legs working at top speed and you’ll light up the penalty box says Aston Villa’s head of performance, Michael Watts:

The best goalscorers come alive inside the 18-yard box; they just seem to know where the ball is going to drop. While everyone else turns to stone, they’re wheeling away celebrating a goal.

This is partly down to instinct, talent and intelligence, but their lightning-quick reactions and clinical finishing are harnessed on the training ground.

World-class strikers like Sergio Aguero are able to perform short, sharp, explosive movements when it matters. Even when they’re tired, they still have the energy to lash the ball into the back of the net.

To reach this level of athleticism you need to cultivate your speed endurance – the ability to sustain maximum speed or near maximum speed and to withstand the effects of fatigue.

If you can accelerate, decelerate, turn and finish repeatedly, you’ll have a huge advantage over defenders at amateur level.

This drill works on speed endurance, acceleration, reaction time and finishing. It’s not just about being quick and fit – it’s about being switched on.

Mark out a distance of 18 yards between a portable mini-goal and the striker. Position a server behind the striker with a supply of balls.

Add another striker to the mix, creating a one-on-one face-off. The two strikers have to compete for the ball and go for goal.

Want some equipment to go with these drills? Lucozade Sport's Kit-Out Project can help. Visit www.lucozadesport.com/kitoutproject to find out more.

For more training tips see:
Fuel-injected footwork
Become a fleet-footed footballer
Get fast on your feet
Shut down your opponent
Ladder to success
Energise your endurance
Build lasting stamina
Rev up your early-season engine