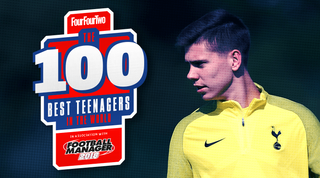 “He’s a mix of Baresi and Beckenbauer,” former Uruguay international Gustavo Matosas once said about one of his players. He was talking about a fledgling centre-back who went from Estudiantes’s U18s to the first team starting line-up in the space of a year - and it didn’t take much longer for Juan Foyth to attract attention from PSG and others before signing for Tottenham in the summer of 2017.

Mauricio Pochettino has bought a 19-year-old who is impressive with the ball at his feet, and who can advance towards attack with assured dribbling.

Calm down, though, Spurs fans: he’s no David Luiz. The £8 million spent on him should seem like a bargain in future.

Has Real Madrid’s long-awaited Fernando Redondo replacement finally been found? We’ll see about that in a few years, but a lot is expected of Valverde at the Bernabeu.

The 19-year-old midfielder has already shown that he responds well to pressure, after scoring on his senior debut for the Uruguayan national team in September and emerging as a viable contender for the 2018 World Cup.

Loaned to Deportivo La Coruna for 2017/18, he’s part of Madrid’s increasing investment in South American talent and probably won’t have to wait much longer before drawing further Redondo comparisons.

Marcelo Gallardo is the most successful River Plate manager of all time, winning almost everything with the Argentine club over the last few seasons. He’s been known as El Muneco ('The Doll') throughout his career – so it's no surprise, then, that the kids he promotes to the first team are now being dubbed Munequitos (little dolls).

Exequiel Palacios is the one to keep an eye on.

“I would love to have played alongside a player like Exequiel,” Gallardo said about the 19 year-old. The River board listened to their coach and tried their best to avoid losing the elegant midfielder as the end of his contract approached. He was already being chased by Italian sides, but agreed to remain at Monumental de Nunez.

Palacios is rated as one of the finest passers by his fellow compatriots, and comparable to the former Porto and Marseille midfielder Lucho Gonzalez. The 19-year-old is the club’s biggest academy hope in a generation – and certainly the finest since the Gonzalo Higuain and Javier Saviola era.

Diego Maradona, Juan Riquelme, Esteban Cambiasso, Juan Pablo Sorin and the aformentioned Redondo are to name but a few graduates from the prolific Argentinos Juniors academy.

Perhaps, in a few years, a new name will be added to that illustrious list: Nicolas Gonzalez. The 19-year-old is pure class, and scored the goal that sealed his club’s comeback to the first division under the watch of former Manchester United, Real Madrid and PSG defender Gabriel Heinze.

Gonzalez played as right winger last season and has now been moved to a central role. He feels comfortable in both positions, as proven by his numbers – four goals in seven games. Roma have already made an enquiry for him and were told that only £10 million would make Argentinos consider selling their starlet.

If it wasn’t for a serious injury, Romero could have been playing for Arsenal by now. The centre-forward had been on Arsene Wenger’s radar for a long time, but saw his move to London fall through in 2015.

His loss? Probably not. If the Gunners consider coming for him again, they’ll now have to spend much more to get the Velez Sarsfield wonderkid. The 18-year-old has been named by France Football among its 12 stars of tomorrow, alongside Dele Alli, Mbappe and Gabriel Jesus.

He never gives up a ball, and fights as if his life depended on it. It's no surprise, then, that Romero went from being a substitute to becoming a regular in the first team in less than a season. He’s the No.9 every coach dreams of – he can finish with both feet and is very good in the air too. Radamel Falcao, who emerged as a promising striker with River Plate before moving to Europe, is his role model.

He made his professional debut at 17, had his first chance when Vasco da Gama were relegated to the Brazilian second division and has always been in the radar of European giants. It may sound like FFT is talking about Philippe Coutinho but, no: it’s Vital’s turn at Sao Januario now.

The 19-year-old playmaker has a lot in common with the Liverpool star, and has been guiding Vasco in their fight for a Copa Libertadores place next season.

The No.10 is known among his closest friends as Mateus Pet, an old nickname from his academy days thanks to comparisons between him and the Serbian Dejan Petkovic, who played at the Rio de Janeiro-based side over two spells.

Apart from the South American Cup title in 2010, Independiente’s fans have had few reasons to smile over the last decade. One thing hasn't changed through time, though – they don’t forget their glorious past, and demand that their sides play in a beautiful way.

That’s why they’ve been so excited about 18-year-old Barco – and you should be too: he’s the latest diminutive playmaker to emerge from Argentina.

Being compared to Ricardo Bochini, the biggest legend in the team’s history, says a lot about the right-footed attacking midfielder. He was given his debut by former centre-back Gabriel Milito and has now already completed 50 professional games. Barco is a true entertainer and should be able to emulate his dribbles abroad in a short time.

Benfica have already come in for him. Others will follow.

Fernandes had always dreamed about becoming a football player, but couldn’t find a club to play for when he was a kid. His dad was unemployed back then and decided to launch a football academy himself, exclusively for his son.

He must be a very proud father right now, as the defensive midfielder has become one of Botafogo’s most influential men.

The 19-year-old hasn’t even completed his first season as a professional but he’s already on Barcelona’s radar. The Catalan side asked him to join their B side and offered the chance of training alongside Lionel Messi, Luis Suarez & Co. He’ll have to wait a bit longer for it, though – his release clause was set at £30 million after the episode.

Most fans had never heard about Matheusinho when he was called up for the sparring squad that was part of Brazilian national team preparation for the 2016 Olympics.

It didn’t take long for the 19-year-old attacking midfielder to be noticed, though: he managed to impress everyone, became pals with Neymar and scored almost as many goals as Gabriel Jesus during the training sessions.

Since then, he’s been compared to Shakhtar Donetsk’s Bernard – not only because of his dribbling skills but also for being only 5ft 4in. The diminutive kid was linked to French side Lille in the last transfer window and probably won't remain at America Mineiro for another summer.

Nobody really understood when Douglas Luiz was left out of a Brazilian League game against Vitoria in July. Not because the former Vasco da Gama midfielder didn’t have what it took to feature in the Premier League... but no one could see the move to Etihad Stadium coming.

Manchester City got Gabriel Jesus the same silent way, and don’t be surprised if Luiz follows his steps in the near future.

He’s already in Brazilian Tite’s thoughts for the 2022 World Cup. “I have already seen him more than once and he delighted me," said the Seleção boss. "I thought to myself: ‘this kid is very good. His touch with the ball, his passing...'”

No wonder the Citizens paid £10.7 million for his signature and loaned him out to Catalan partners Girona for 2017/18.

FourFourTwo's 100 Best Teenagers in the World 2017