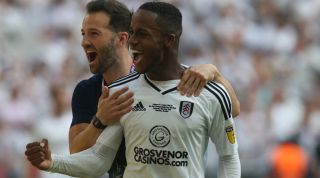 Bissouma is interesting because his move to Brighton will, you suspect, either go very well or very badly. He’s a new signing at the Amex Stadium, a £15m arrival from Lille, and – although the French club struggled badly in 2017/18 –it was hard not to be seduced by Bissouma’s flashes of skill.

He’s a bowling ball of a midfielder, physically equipped for Premier League life, but it’s the technique which really makes him look like a smart addition. Imagine a younger, more vertical version of Tottenham’s Moussa Dembele: that’s what Chris Hughton appears to have bought.

Well, obviously. For those not familiar with Ryan Sessegnon, don’t be expecting a rampaging winger purely with skill and pace to burn. Instead, he provides a more plotted threat: he finishes well, arrives in the right positions at the right time, and seems to be improving each year under Slavisa Jokanovic.

Will that translate to the higher level? Well, it should do. Traditionally, players who are overly reliant on physical attributes tend to struggle with that jump, but Sessegnon isn’t that and his intelligence should allow him to make a real impression on the top flight.

Leicester parted with a lot of money for Maddison (the fee could rise to £24m) and did so on the basis of performances in the Football League. That’s always a risk and it naturally creates a fair amount of pressure too.

But Maddison should be able to shoulder that burden. He’s not the sort of attacking midfielder to be a constant influence within games – even in the Championship he had a habit of drifting to the periphery – but the higher standard around him should complement his abilities.

His free-kicks have been on steady YouTube rotation for some time now, but his broader creativity is perhaps more relevant. Where he fits in at the King Power remains to be seen, but his general finesse should make him popular and his delivery will help fill the post-Mahrez void.

At time of writing, Toby Alderweireld is still a Tottenham player. Regardless of whether he leaves, though, Sanchez now appears to be Mauricio Pochettino’s first-choice partner for Jan Vertonghen in central defence.

His first season in England was broadly a success, but it wasn’t without its hiccups. Sanchez was capable of looking immovable for 89 minutes, but then allowing lapses in concentration to invite opposition chances. Wilfried Zaha gave him a torrid time at Wembley in 2017/18 and a stoppage-time misjudgement very nearly threw away a north London derby win.

For now, that can be attributed to inexperience. A year on though and with a World Cup to his name, Pochettino and Spurs can expect an evolution from their newest centre-half - one which, perhaps, might lead to him becoming one of the finest defenders in Europe one day.

Nobody really talks about Cook, perhaps because he plays for Bournemouth, but they really should. His smart possession play fits so neatly into the house style at Dean Court, it’s very easy to miss just how composed the midfielder is and how efficiently he cuts the lines with his passing.

There’s work to do: defensively he’s still not the most secure and he made little impression on the best teams in the division last season. But Bournemouth have improved – David Brooks has been added to the midfield, while Diego Rico has arrived to strengthen Eddie Howe’s full-back options – and bright young thing Cook should benefit by proxy.

Hardly a pick from under the radar, of course, because Everton have just broken their transfer record to sign the Brazilian.

But perhaps the reaction to that deal has been too negative. It’s been too easy to accuse Marco Silva of overspending when, really, the Richarlison who was so consistently excellent at the beginning of last season looked worth every penny of the £40m (or more) that Everton have reportedly spent. Sure, he slumped, but so did Watford - and the midfield around him was constantly disrupted by injury.

Goodison Park should be a richer environment. Silva may have inherited defensive issues, but he’s also now in possession of Gylfi Sigurdsson, a useful forward in Cenk Tosun, and a still-above-average Theo Walcott on the right side. How Richarlison’s direct threat is multiplied by those factors is an excellent sub-plot.

INTERVIEW Richarlison: “On the day that the guy pointed the gun at my head, he thought I was a drug dealer”

His technical abilities hardly need explaining. We know what a mesmerising influence he can be on the left, but the curiosity lies in how he responds to his disappointing summer. He was unexpectedly jilted by Germany ahead of the World Cup and while that may have proved a blessing in disguise, it will doubtless have bruised his ego.

So what will the retaliation look like? He’s had a full pre-season, will be comparatively fresh, and should be primed to be extra destructive once the new campaign begins. When they have a point to prove, players tend to go one of two ways: either they sulk and feel sorry for themselves, or they perform as if having been personally affronted. If it’s the latter with Sane, that’s a terrifying prospect for Premier League defenders.

The caveat first: he might not stay at Chelsea this season and, if he does, his non-participation in Maurizio Sarri’s pre-season will likely count against him.

For the sake of his career, though, he must play regularly. Loftus-Cheek may have only been a peripheral figure in England’s World Cup campaign, but he seemed to get stronger every time he touched the ball in Russia. Surely his is a talent that Chelsea can’t afford to ignore for much longer.

Jorginho’s arrival clearly narrows his window of opportunity in midfield, but Loftus-Cheek is so obviously well-equipped for Premier League football that eventually common sense has to prevail at Stamford Bridge. It’s hope rather than expectation, but steady involvement alongside players like Eden Hazard, N’Golo Kante and the rest would do him the power of good and provide him with the necessary self-assuredness to begin growing towards the sun.

The pertinent point is this: there’s very little that Loftus-Cheek doesn’t do well. Either he plays this season at Chelsea, or he has to leave permanently. Otherwise it is an enormous waste.

Torreira is the player Arsenal have been needing for a generation. Not a midfielder who is a possession player first, but an actual holder; a rugged, nasty screen in front of a defence which itself is in the middle of a re-fit.

The Uruguayan has all the technical ability required to fit in and he scored some stunning goals in Serie A, but it’s his dirty work which will be a sight for sore eyes at the Emirates this season. His influence won’t be apparent against the lesser teams, but that’s hardly the point: Arsenal have needed someone who allows them to compete in the marquee fixtures for years and, tentatively, this should be their man.

He needs to stay fit. Had he not suffered a recurrence of an ankle injury, Winks likely would have gone to the World Cup. As it was, he was lost for the season from February onwards.

Winks is an unerringly confident player. He never seems rushed in possession, never appears afraid to pick his pass. Most importantly though, he is perpetually forward-thinking: when he releases the ball, it tends to be both accurate and vertical.

Tottenham’s midfield is in a slightly fluid state currently, with Moussa Dembele coming towards the end of his time at the club and Victor Wanyama once again injured. Winks didn’t travel to the United States for pre-season and likely won’t be fit before the end of August, but he has a chance now to establish himself as a proper first-team player and those extra minutes would really help to accelerate him towards his huge potential.