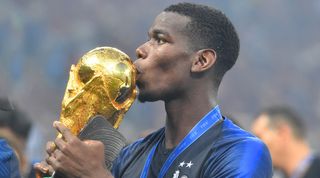 Two decades on from their maiden World Cup triumph, France won the tournament for the second time in their history with a 4-2 victory over Croatia in the Moscow showpiece. It was a strange final and Les Bleus’ attacking performance was nowhere near as convincing as the scoreline may suggest, but it’s hard to begrudge them their triumph after six wins in seven games in Russia.

France’s squad was widely regarded as one of the most talented in the competition before the big kick-off, but there were considerable doubts over Didier Deschamps’ ability to mould the individuals at his disposal into a well-functioning collective. They haven’t always dazzled going forward and their success was primarily built on their solidity in defence, but Deschamps deserves credit for fashioning a coherent unit which was adept at holding opponents at arm’s length throughout.

Raphael Varane was a rock at the back, N’Golo Kante – an uncharacteristically shaky showing in the final aside – was a bundle of energy, Paul Pogba was both creative and disciplined, Antoine Griezmann worked hard and scored four times, while Kylian Mbappe gave a demonstration of his prodigious ability on the biggest stage of all. France often left viewers wanting more, but it’s hard to argue with an approach which brought the nation a first World Cup trophy on foreign soil.

Regardless of the outcome on Sunday, the Real Madrid playmaker was a worthy recipient of the Golden Ball. Modric starred in the group stage as Croatia took nine points from a possible nine, before the Vatreni beat Denmark on penalties in the last 16 despite a subdued display from their talisman. Modric was then back to his best in helping his side past Russia and England to set up a first-ever appearance in the final of a major tournament, and he was again one of Croatia’s better performers at the Luzhniki Stadium.

The 32-year-old and his team-mates head home with their heads held high. Reaching a World Cup final is a phenomenal achievement for a country of four million people, and Croatia’s players, staff and fans will cherish this summer despite the fact they couldn’t quite get over the line.

Russia confound doubters on and off pitch

Pre-tournament predictions that Russia would be the worst host nation in history were made redundant after 90 minutes of action, as Stanislav Cherchesov’s charges blew Saudi Arabia away 5-0 in the competition’s curtain-raiser. That handsome victory was followed up by another as Egypt were dismissed 3-1, although Russia were brought back down to earth by a 3-0 loss to Uruguay in their final group game.

A last-16 berth represented the minimum requirement for the hosts, and their journey looked certain to come to an end against Spain – particularly after Sergei Ignashevich turned the ball into his own net in the 11th minute. Yet Russia fought back to level through Artem Dzyuba, before showing some remarkable resilience to take the tie to penalties, where Igor Akinfeev’s saves from Koke and Iago Aspas proved decisive as Cherchesov’s men pulled off arguably the biggest shock of the summer. They may have bowed out in a shootout against Croatia in the quarter-finals, but reaching the last eight was a huge overachievement for this team.

The World Cup was also a success off the field, as FIFA’s festival of football arrived in Eastern Europe for the first time. It’s important to remember that the charges levelled against the political regime Russia haven’t been answered by a month-long football tournament, but the last few weeks have certainly provided a welcome reminder that there’s far more to the planet’s largest country than President Putin and the Kremlin.

The tournament exploded into life on day two, when Egypt 0-1 Uruguay and Morocco 0-1 Iran were followed by a thrilling 3-3 draw between Spain and Portugal. La Roja were the better team for much of the match, but a stunning hat-trick from Cristiano Ronaldo stole the headlines and ensured Fernando Santos’ men didn’t leave the Fisht Olympic Stadium empty-handed.

Ronaldo opened the scoring from the penalty spot after being fouled by Nacho, before later edging Portugal 2-1 in front after an uncharacteristic error from David de Gea. Spain fought back to go 3-2 ahead, but Ronaldo’s sublime 88th-minute free-kick restored parity once more.

It wasn’t just the goals, either: the 33-year-old also impressed with his link-up play and ability to lead counterattacks, particularly in the first half. Ronaldo is unlikely to win the World Cup before he retires, but his tremendous all-round display against Spain won’t be forgotten in a hurry.

Argentina and Colombia were particularly well represented in Brazilian stadiums four years ago, and it was South American supporters who again provided much of the colour, noise and joie de vivre in Russia. The continent’s rising middle class means increasing numbers can afford to travel abroad to follow their national teams, with Peruvians, Colombians, Uruguayans, Brazilians and Argentines duly filling the streets and stands of Moscow, St Petersburg and beyond this June and July.

Unfortunately for fans of those nations, this was another tournament dominated by Europe; seven of the last eight finalists have been European, with Argentina the sole exception in 2014. The Albiceleste were eliminated in the last 16 this time around after scraping through the group phase by the skin of their teeth, while Colombia were knocked out by England at the same stage.

Peru performed well but didn’t even make it that far, finishing third in Group C, while Uruguay – who, in fairness, continue to punch above their weight – were dispatched of by France in the quarter-finals. Brazil were the continent’s biggest hope heading into the competition, but they too failed to progress to the semis and will have gone two decades without winning the trophy by the time Qatar 2022 rolls around.

VAR. What is it good for?

Quite a lot, as it happens. The consensus before the tournament was that FIFA had taken a major risk by authorising the use of VAR at this summer’s World Cup, but fears that match officials weren’t ready for its introduction proved unfounded. Granted, the technology didn’t completely remove controversy from the equation, but that was never a realistic ambition and there were multiple examples of its merits, particularly in the group stage.

Most importantly of all, it didn’t unduly disrupt the flow of the game. Again there were exceptions – Portugal vs Iran was hardly the best advert – and it was notable that there were far fewer referrals in the knockout phase, at least until France were awarded a penalty for handball in the final. Overall, though, VAR was a success at the World Cup, so much so that it will suddenly feel strange to return to a world without it in the Premier League next season.

Before this summer, three of the last four defending champions crashed out at the group stage (France 2002, Italy 2010, Spain 2014), but it was presumed that Germany would be immune to that trend. This, after all, is a nation who managed to reach the final in 2002 with one of the worst teams in their history.

As it turned out, even Die Mannschaft weren’t immune from the holders curse. A disastrous first half against Mexico led to a 1-0 defeat in their opening game, before Toni Kroos’ fantastic free-kick in second-half stoppage time earned Germany a reprieve – and a 2-1 win – against Sweden. Victory over South Korea would have been enough to seal their passage to the last 16, but Joachim Low’s side were left stunned as they fell to a 2-0 defeat in Kazan.

Belgium fire back against Japan

There’s an argument to be had that Belgium, 2-0 winners over England in the third-place play-off, were the best team at the World Cup. One of only three sides to amass maximum points in the group stage, the Red Devils shocked Brazil in the quarter-finals and were somewhat unfortunate to lose a hard-fought encounter against France in the last four.

Yet despite their undoubted attacking quality – Eden Hazard was one of the standout performers in Russia, while Romelu Lukaku was probably the foremost centre-forward – Belgium always looked vulnerable defensively. Tunisia scored twice against them in the group stage, and Brazil created numerous chances as they sought an equaliser in the quarters.

It was in the last 16 when their frailties were almost fatally exposed, though. After an even first half, Japan scored twice in quick succession to leave Roberto Martinez’s side on the brink of a premature departure. Jan Vertonghen’s looping header gave them hope and Marouane Fellaini levelled the scores with a quarter of an hour left to play, but extra time beckoned as the clock ticked into the fourth minute of stoppage time.

There was, however, still enough seconds remaining for one last attack, and Belgium made the most of their opportunity with a blistering break which started with Thibaut Courtois and ended with Nacer Chadli finishing at the far post, with some key contributions along the way from Kevin De Bruyne and, despite not touching the ball, Lukaku with a clever dummy. It was a terrific way to complete the best comeback of the tournament.

Twenty years after working together at the World Cup in France, Jon Champion and Ally McCoist were reunited in the commentary box this summer – and ITV viewers were the winners. McCoist’s boyish enthusiasm was infectious, while his humour and natural chemistry with the excellent Champion was a world away from the forced, cringe-worthy ‘banter’ shared by many microphone-wielding duos.

The standout moments were McCoist’s interludes about the unique history and culture of the city the pair were broadcasting from. As well as insights into Stalin’s summer house in Sochi and the literary qualities of Maxim Gorky, we were treated to one of the all-time great World Cup co-commentary lines during Colombia’s 3-0 victory over Poland.

“It’s [Kazan] unbelievable, Jon,” McCoist gushed in the first half. “If you put me in a corner and nailed me, it’s probably my favourite place on the trip so far. Just some stunning, stunning architecture Jon, I’ve got tell you. It’s come a long way since it fell to Ivan the Terrible in 1552.”

World Cup flops: The most disappointing XI from Russia 2018

You’ve probably already read plenty on the debate over whether the ‘It’s coming home’ phenomenon was arrogant or tongue-in-cheek, so we won’t go into that here. What can be said with certainty is that, despite their ultimate failure to go all the way, this World Cup brought a reunion between the England national team and the public back home.

Much of the credit must go to Gareth Southgate, whose dignity and humility has shone through over the last few weeks. And it’s not just his personal traits that have helped bring fans back on side: the former Middlesbrough boss has imbued the England team with a clear identity and style of play based on modern footballing principles, all while promoting youth and refusing to bow to so-called big names. They even managed to win a penalty shootout, beating Colombia on spot-kicks in the last 16.

There’s no denying that England were handed a favourable run to the semi-finals, thanks largely to Germany’s early exit. Yet the positivity generated by the Three Lions’ performances at the 2018 World Cup relates more to the process than results, and there’s every reason to believe Southgate’s side can build on their fourth-place finish and come back stronger at Euro 2020.