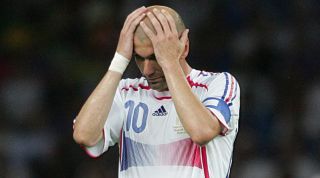 Using the bookies as a barometer, Kylian Mbappe and Luka Modric are in a two-way tussle for Russia 2018’s Adidas Golden Ball. Yet if the award’s farcical history is anything to go by, don’t rule out the FIFA Technical Study Group (which comprises Emmanuel Amunike, Bora Milutinovic, Carlos Alberto Parreira, Andy Roxburgh and Marco van Basten), handing it to a dumbfounded German.

Since its introduction for the 1982 World Cup, these are the most head-scratching Golden Ball choices.

Paolo Rossi took five appearances to score in Spain. He was, in the meantime, chastised by the Italian press. Granted, when ‘Pablito’ awoke, he exploded into action with a hat-trick to stun Brazil, which preceded a double against Poland and the opener against West Germany in the final. But five of his six goals were opportunistic close-rangers and, given the chance to lead manager Enzo Bearzot’s line, striker Alessandro Altobelli could have probably buried them too.

Dino Zoff, Claudio Gentile, Gaetano Scirea and Brazil composer Falcao were superior performers. Yet the cream of the crop was Bruno Conti.

The diminutive winger was exhilarating in Italy’s curtain-raiser, his feints and turns on both flanks sending multiple Poland players lunging into thin air. Conti dispatched a gorgeous goal in the 1-1 draw with Peru. He was magnificent against Brazil – “We were playing against 10 Italians and one of our own,” rued Zico – and gave the Poles a second serving of humiliation in the semi-finals. Then Conti was involved in two of Italy’s goals in the final.

“There’s been a lot said about Maradona and Platini and others, but Conti is the best player in the world,” stated Pele.

The world obsessed more over Ronaldo heading into France ’98 than they had over Pele heading into Mexico ’70 or Diego Maradona heading into Italia ’90. He was fresh from blistering back-to-back seasons for Barcelona and Inter. He was threatening to turn the Pele/Maradona discussion into a three-way greatest of all time debate. The Brazilian had been the protagonist in that epic, airport-shot Nike advert and he monopolised FourFourTwo magazine’s July 1998 edition.

Ronaldo was good in the group stage, even if he only scored once, against Morocco. He was better in the knockout phase, bagging a brace in a 4-1 win over Chile, cannily setting up two goals against Denmark, and producing an exceptional semi-final performance against the Netherlands in which he put Brazil ahead and almost scored one of the greatest goals in World Cup history.

However when it mattered most, for reasons that will be debated for decades to come, Ronaldo did nothing as Brazil were trampled by France 3-0 in the final.

Lilian Thuram was a key reason France set a new record for the fewest goals conceded by a World Cup-winning team: two goals (which was equalled by Italy in 2006 and Spain four years later). Playing at right-back, he marked infallibly, made telling interceptions, and some impeccable tackles – most notably on Ibrahim Al-Shahrani, Alessandro Del Piero, Goran Vlaovic and Denilson.

From the quarter-finals onwards, when manager Aime Jacquet began to play with three defensive midfielders instead of two, and therefore charged Thuram with providing an attacking outlet down the right, he did just that. When the Guadeloupe-born Parma man played Davor Suker onside to score in the semi-finals, Thuram responded by scoring the only two goals of his 142-cap career to snatch a 2-1 victory.

Thuram, nevertheless, scooped merely 8.8% of the votes to take home the Bronze Ball, with Davor Suker’s 10.8% securing him Silver and Ronaldo winning with 21.3%.

Staggeringly, Germany conceded more goals than 22 sides in European qualifying for the World Cup. When there, they leaked just one goal in six games to unexpectedly creep into the final – a run indebted to goalkeeper Kahn. Although Rudi Voller’s judicious system limited opponents to very few shots on Germany’s goal, the cantankerous blond used Peter Schmeichel-esque starfishing and electric reflexes to produce stunning saves from Robbie Keane, Landon Donovan and Lee Chun-soo.

Ronaldo, however, was even better during his country’s route to Yokohama. In his injury-enforced absence, Brazil had almost missed out of qualifying, finishing behind hitherto whipping boys Ecuador. However in the tournament itself, Ronaldo’s six goals in as many appearances got Brazil into their seventh World Cup decider.

Nonsensically, FIFA decided to hold the vote for the Golden Ball one day before the final, and limit it to media members present at the non-event that is the third-place play-off. Kahn received 25% of the votes, Ronaldo got 21%.

If was a close decision victory for the Karlsruhe native, yet Ronaldo scored a conclusive knockout the following day. “It was 10 times worse than any mistake I've ever made,” said Kahn of his 67th-minute gaffe which gifted Ronaldo the opening goal. Brazil’s No.9 then buried a superb finish into the bottom corner to seal a 2-0 victory. The grandest fixture in football couldn’t have gone much better for him. It couldn’t have gone much worse for Kahn.

FIFA – surprise, surprise – didn’t learn from its faux-pas four years earlier. The Golden Ball was, once again, voted for before the final. The winner, once again, proved to be the player most people associate with his side’s failure in it. Zinedine Zidane may have scored a penalty to put France 1-0 up, but his final is mainly remembered for him landing the most notorious headbutt in sporting history on Marco Materazzi. His last act as a professional footballer earned Zizou a red card. France duly lost to Italy in a penalty shootout.

The tournament had begun forgettably for Zidane. The 33-year-old was limp in lamentable draws with Switzerland and South Korea, earning bookings in each game that ruled him out of their must-win final Group G game against Togo (France won it 2-0).

Thereafter, however, Zidane discovered his irresistible groove. He was the architect behind France’s 3-1 comeback win over Spain in the last 16, produced one of the finest individual displays in World Cup history against Brazil in the quarter-finals, then netted the only goal from the spot against Portugal in the semis.

Those three positive performances, however, should have been insufficient to seize Zidane the Golden Ball – and wouldn’t have had the vote been done after the final. Gigi Buffon, Fabio Cannavaro and Andrea Pirlo would have all been worthy winners, but ‘The Berlin Wall’, as Cannavaro became known in Germany, was narrowly the finest of the three.

Despite losing his central-defensive partner, Alessandro Nesta, to injury in the group stage, Cannavaro was infallible throughout as Italy weathered a few storms to triumph.

"I would give heaven and earth to Leo, but when marketing people want him to win something he didn't [deserve to] win, it’s unfair,” said Diego Maradona. "I could see that he didn't even want to go up and collect it.”

But Messi did collect the Golden Ball after Argentina’s 1-0 defeat to Germany in the final, from FIFA president Sepp Blatter, who himself was taken aback. “I was a little bit surprised when I saw Messi coming up to collect the best player award,” he later claimed.

Messi hadn’t looked fully fit in Argentina’s opening two games, against minnows Iran and Bosnia & Herzegovina, but had come up with brilliant goals to nick victory. ‘The Flea’ looked his mesmerising self against Nigeria – however he didn’t score, or show his true genius, during seven-and-a-half hours of knockout-stage action.

Several players were more worthy than Messi of the Golden Ball, including team-mate Javier Mascherano, Germany pair Manuel Neuer and Toni Kroos, Costa Rican goalkeeper Keylor Navas, and particularly Colombia's James Rodriguez and Dutch winger Arjen Robben. The latter was swashbuckling in Brazil, relentlessly demanding the ball, slaloming past opponents with it, and stabbing them with a deadly end product. The Netherlands No.11 won penalties, created goals and scored three beauties himself. But he claimed only a Bronze Ball for his troubles.

Year: winner (who should have won)