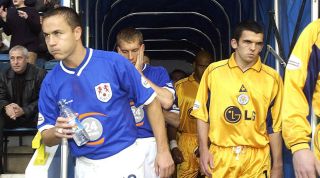 Sunderland made a string of blunders during their rapid descent to League One; accusations of overspending, uncommitted signings and a seemingly endless parade of managers were all part of the problem.

Many of those issues have been addressed in the Black Cats’ search for stability, which has led to the majority of high earners leaving. Papy Djilobodji was among them, eventually having his contract terminated after he reported back late and “comprehensively failed” a fitness test.

Darron Gibson left by mutual consent two weeks after a drink-driving conviction, while Didier Ndong became the second player to see his contract ripped up after going AWOL and refusing to return to Wearside altogether this season.

The former Chelsea captain enjoyed legendary status at Stamford Bridge but is remembered far less fondly by Leicester supporters after a brief and ill-fated spell at the club.

Wise was sent home from a pre-season tour of Finland after an argument over a card game escalated to him breaking the nose and jaw of his team-mate Callum Davidson.

This wasn’t the first time that the notoriously-feisty Wise had been in trouble for failing to control his temper. This incident had major repercussions, however, as Wise was sacked by the Foxes for serious misconduct despite having almost two years left on his contract. His appeal against the decision was initially successful but later overturned.

Roman Abramovich’s takeover in July 2003 transformed Chelsea’s prospects overnight. More than £100 million was spent on new players that summer as the Blues looked to immediately challenge for the title.

Along with the big-money acquisitions of Hernan Crespo, Juan Sebastian Veron and Claude Makelele, Mutu was one of the club’s most significant investments.

The Romanian striker started well after signing from Parma but soon fell out of favour once Jose Mourinho arrived. He tested positive for cocaine in September 2004, leading to a seven-month ban and a £20,000 fine from the FA.

Mutu’s contract was terminated and Chelsea went on to seek substantial compensation for the player, having breached the terms of his deal. Incredibly, only as recently as this month did the former striker lose his latest appeal against a ruling that he must pay the Blues £15.2m in compensation.

The French striker always had a reputation – arguably overblown – for being sullen, distant and difficult. He might not have smiled too often, and rarely stayed in one place for more than a couple of seasons, but Anelka hardly ever caused his clubs much trouble after he left PSG in 2001. West Brom were a notable exception.

He scored twice for the Baggies, both goals coming in a 3-3 draw with West Ham, but it was his celebration that upset the football authorities. Anelka performed a gesture known as the quenelle, which has anti-Semitic connotations.

Although he pleaded ignorance of such an interpretation, he was fined by the FA, banned for five matches and ordered to complete an educational course. West Brom later cancelled his contract for gross misconduct.

A £15 million signing from Roma, Osvaldo was supposed to help take Southampton to the next level. He scored three goals in 13 appearances, including a superb solo effort against Manchester City, but was soon getting into trouble for his erratic behaviour. A fine and a three-game ban for his role in a touchline scrap against Newcastle was followed by a two-week suspension for a training ground fight with Jose Fonte.

Osvaldo was loaned out to Juventus and then spent a season at Inter Milan, before Southampton terminated his contract in July 2015. Disciplinary problems were the underlying reason as the Saints chose to wash their hands of the Italy international.

After brief spells with Porto and Boca Juniors, he retired a year later to focus on his band, aged just 30.

He’s been accused of plenty of things in his time, but never of lacking conviction. Although Boateng can be hot-headed, he knows his own mind and is prepared to take a stand.

Unfortunately for him, the Ghanaian midfielder’s no-nonsense attitude hasn’t always been appreciated by his employers.

Together with team-mate Sidney Sam, Boateng was suspended by Schalke following a defeat to Cologne. Although the precise reasons why weren’t specified, manager Roberto Di Matteo blamed a lack of mutual trust for the decision, and the former Portsmouth man was released in December 2015. He briefly returned to Milan and has played for three more clubs since.

Following Dundee’s lead in signing Claudio Caniggia, Livingston decided to recruit an Argentina international of their own. Berti, previously of River Plate and Real Zaragoza, had won 22 caps during his international career, including two at the 1998 World Cup.

The midfielder moved to the Scottish Premier League four years later but was released before making a competitive appearance.

Livingston’s shock decision came after an incident in pre-season against Morecambe, when Berti spat on team-mate Richard Brittain. Although his association with the club was swiftly ended, the SFA upheld the player’s appeal and the club were ordered to pay off his contract in its entirety, which amounted to £250,000.

In January 2017, Evra left Juventus to sign for Marseille on an 18-month contract. By November he was being let go. If the Frenchman was hoping to gently wind down his career back in France, he was sorely mistaken – a confrontation with supporters brought his time at the club to a premature and acrimonious end.

The former Manchester United left-back was warming up ahead of a Europa League game against Portuguese side Vitoria Guimaraes, for which he’d been named as a substitute, when critical comments and chants got the better of him. As tensions boiled, Evra kicked out at a Marseille fan and was sent off before the match started.

Unsurprisingly, he was suspended by l’OM, charged with violent conduct, banned from playing in UEFA competitions until June 2018 – and then sacked by his club for good measure.

Like Adrian Mutu, Bosnich was banned from football for having cocaine in his system. Although he appealed on the basis that his drink had been spiked while on a night out, the Australian goalkeeper later admitted to developing an addiction to the drug.

Having taken a long time to get fit after arriving at Chelsea from Manchester United, Bosnich made just seven appearances for the club. He was sacked in January 2003 and lost his case against the club for unfair dismissal as a previously promising career went off the rails, leading to several years in exile.

During a colourful and often-controversial playing career, Barton was never far from the headlines. There were several notorious incidents in his early years before he mellowed somewhat, although Rangers supporters might be inclined to disagree after his two-year contract was ended within six months.

After just eight appearances, Barton was suspended following arguments with manager Mark Warburton and team-mate Andy Halliday. Ordered to stay away from the club, Barton made some attempt at reconciliation but felt he hadn’t done anything to apologise for. The relationship was irreparably damaged, and he was cut loose in November 2016.

RANKED! Every Premier League club by how ‘big’ they are

Robbery, assault, criminal damage, conspiracy to defraud: Ranger has amassed quite a rap sheet for a 27-year-old professional footballer. Despite the various arrests and associated controversies, several clubs have been prepared to take a risk on the striker’s ability and the promise that he will turn his life around.

Southend were the latest, and they even stood by him after he served 10 weeks in prison for his part in an online banking fraud.

He returned to play for the Shrimpers last season, but by January they’d finally had enough of his off-field baggage and terminated Ranger’s contract on the basis of ‘recurring disciplinary issues’.