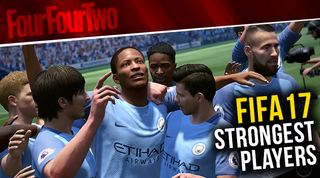 FIFA 17 may be a little light on actual gameplay features this year (as we reported in our recent review) but one alteration has seen the importance of big burly targetmen. Our FIFA tips guru Ben Wilson recently travelled out to Canada to meet the games' developers at their studio in Vancouver, and to ask for some insight on the new game. And the importance of physical front players was a piece of key advice that came back – as you can read further in our FIFA 17 tips article here.

But maybe you're just curious to see who the strongest players in the world are after Bayo Akinfenwa. Read on… (Credit to Elliott Walsh for additional writing/research.)

The Costa Rica international has spent three seasons at Vancouver. At 6ft 5in, and with his name ending in Manley, you certainly wouldn’t want to mess with him. With two red cards this season it would appear that a few people already have.

What he lacks in pace, he more than makes up for in strength. A former Germany under-19 player, he has recently joined Dynamo Dresden following their recent promotion to the 2.Bundesliga. Aged just 23 he may be a regular on this list in future years.

Another player plying his trade in America, for FC Dallas, Bonner is the first striker on the list. Making his first appearance in FIFA 17 this year.

A former Peterborough, Dagenham and Bishop’s Stortford player among others, he is now one of the few Englishmen playing football abroad and has seemingly settled at Falkenburg in Sweden's Allsvenskan.

The Dane is a recent signing for Borussia Mönchengladbach from Werder Bremen. At 6ft 6in he enjoys a good height advantage over Barcelona’s famous striking trio in the Champions League group stages.

The highest-profile name on the list, Bony is currently on loan at Stoke. Clearly a big strong targetman isn’t in Pep Guardiola’s thoughts: who would have guessed?

Height and strength don’t always go hand in hand, but in the case of 6ft 7in specimen Ba it certainly does. One of the tallest players on the game and the fourth strongest – not bad for the Lens defender.

Linked with Swansea and Blackpool within the last few years, the Panamanian is now playing for Seattle Sounders. A big man with a big afro, and tribal sleeve tattoos to look even badder.

Having appeared in all of the top four divisions in England, Elokobi is a name well recognised across the country. His Colchester side may have been relegated at the end of last season, but he moves up four places to 2nd in FIFA 17’s strength rankings.

A man who has become something of a cult hero among fans of FIFA. Once again retains his crown as the strongest player in the game, which doesn’t come as much surprise. Capable of bench pressing 180kg – just check out the video at the top of the page for what he can crush in one hand – Akinfenwa might not have the build of a footballer but he played a huge part in AFC Wimbledon’s promotion last season. Wycombe fans will hope he can do the same again this season.