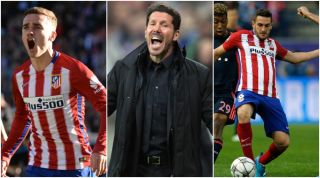 Atletico Madrid are primarily considered a defensive side, but they’re also capable of producing proactive, attack-minded spells, taking the game to the opposition and putting themselves in command.

Often, this happens after some energetic pressing high up the pitch – but Atletico still have to provide the technical quality and tactical intelligence to break teams down. Here are three ways they might do that in Saturday’s Champions League final against Real Madrid…

Two years ago Atletico were solely a counter-attacking team, largely depending upon Arda Turan to convert defence into attack smoothly. Koke, on the other hand, is capable of doing something similar – but prefers playing a slightly slower, cautious style of football.

Atletico are still a counter-attacking side, but Koke’s increased influence means they’ve become better at commanding possession when required, and breaking down deeper defences.

“He has everything: talent, physical ability; he is a footballer of the present and the future,” said Xavi last year. “He has been marked out as the conductor of Spain's orchestra for the next 10 years. I have a special affection for him.”

Koke has sometimes been fielded in a central midfield position by Diego Simeone this season, and is also capable of playing as a No.10, although it would be a surprise if he didn’t start from the left flank this weekend. As his recent display against Levante shows, he rarely moves into the penalty box himself, but constantly tries killer passes.

Koke’s passing quality means Atletico are capable of taking the game to the opposition, camping inside their half and playing patient, probing football, passing from side to side before suddenly offering penetration. He has improved his efficiency in the final third during the second half of the campaign, after a slightly sluggish start to 2015/16, and against a Real Madrid side that often lacks shape without the ball, he could be key to breaking them down.

Atletico’s main attacking threat will be Griezmann, who has enjoyed his most prolific season. In fact, the Frenchman has improved his goal return in every season of his professional career: 6, 7, 8, 11 and 20 for Real Sociedad, then 25 and 32 for Atletico Madrid. The stats tell the story; he gets better and better.

It’s not all about his goalscoring ability, however, and this season there’s been a marked improvement in Griezmann’s all-round link play.

As a converted winger handed a counter-attacking brief up front, his natural gameplan is sprinting directly towards goal, sometimes taking on opponents solo rather than attempting to link with team-mates. But when Atletico are playing higher up the pitch, he’s fully capable of feeding onrushing midfielders.

As Griezmann demonstrated in Atletico’s 1-0 victory over Real Madrid at the Bernabeu in February – a game where he hit the winner – his passing ability has become excellent. He regularly dropped deep into positions between the lines, helping Atletico’s build-up play and playing quick passing combinations to encourage midfielders into attack.

This could be particularly important this weekend. Casemiro, Real’s sole holding midfielder, is forced to cover a huge amount of ground in front of the back four, and if Atletico are able to overload him between the lines – perhaps with two of Koke, Saul and Griezmann – they could cause problems. With Fernando Torres back on form and running in behind menacingly, Griezmann can afford to drop off when required.

Simeone is primarily an excellent organiser of players in a defensive sense. Atletico are the best-drilled side in Europe without the ball, conceding fewer than 0.5 goals per game throughout their La Liga campaign, and they’re capable of changing system to increase their defensive effort, in particular moving from a 4-4-2 to a 4-1-4-1, using a solid holding midfielder in front of the defence.

In the semi-final against Bayern Munich, however, Simeone made this change for attacking reasons. After Atletico started poorly in Bavaria, Simeone decided to sacrifice holding midfielder Augusto Fernandez at half-time, introducing Yannick Ferreira Carrasco, an attack-minded left-winger.

Surprisingly, Saul – who had scored the winner in the first leg with a mazy dribble through the Bayern defence – dropped back into the holding role.

Sorry Gareth, you're bang wrong – but who really would make a combined Madrid XI?

Now, with Saul protecting the defence, Koke and Gabi were given license to push forward and press Bayern’s backline. The wide players, Ferreira Carrasco and Griezmann, stormed forward in support of Torres, with the striker teeing up Griezmann for the crucial away goal which effectively sealed their progress. Atletico were a changed team, and Simeone’s tactical switch was the main reason.

Atletico are likely to start in a 4-4-2 system in Milan, but it’s highly likely Simeone will change his formation at least once. Reactive managers are often considered defensive – but a tactical tweak this weekend might be about exploiting Real’s problems without the ball.