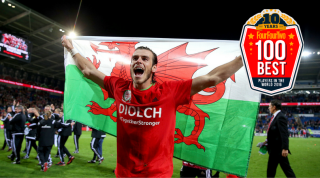 The Leicester striker enjoyed a fairy tale 2015/16, as his 24 goals fired the Foxes to an unlikely Premier League title. Vardy's found things a great deal tougher since rejecting Arsenal in the summer, but has still had a phenomenal year.

It can be easy to forget that Alli only made his Tottenham debut last August. The 20-year-old scored or assisted 19 goals as Spurs challenged for the Premier League title last season, with the England international now a mainstay of Mauricio Pochettino's side.

Kane consolidated his position as one of the Premier League's best strikers with another 20 goals in the first 11 months of 2016. A recent six-week layoff with injury underlined the homegrown centre-forward's importance to this Spurs side.

Sterling's debut season at Manchester City was a little underwhelming, while he also struggled at Euro 2016 with England. He's bounced back under the tutelage of Pep Guardiola this term, though, scoring five goals and providing four assists in 17 Premier League and Champions League appearances.

The king of British football. Bale has had another brilliant year, starring in Wales' run to the semi-finals of Euro 2016 and winning a second Champions League trophy with Real Madrid. When it comes to players from the Home Nations, there's no one better.