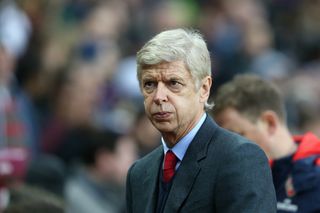 While it’s a summer of managerial change in Manchester – Pep Guardiola long confirmed at City, Jose Mourinho increasingly likely at United – North London’s big clubs look set to stick rather than twist. Tottenham are understandably delighted with Mauricio Pochettino, while the rumblings around Arsene Wenger’s position at Arsenal have been somewhat quietened by leapfrogging the local rivals into the first top-two finish since 2005.

The Gunners are not given to turmoil: Wenger likes to honour his contracts, and with Champions League football secured for another season, the board have little reason to ask him to leave. But if the Frenchman is to stick around, there are things he simply must look to change at the club.

Get the British project back on track

It was said that Arsene Wenger began to fill his side with British talent in response to the foreign players who had consistently left him just as his sides were taking shape. Emmanuel Adebayor, Kolo Toure, Gael Clichy and Samir Nasri left for the riches of Manchester City, while Cesc Fabregas was lured to Barcelona. Wenger reportedly believed British players would be less inclined to leave, and while this has proven correct, it could be argued that none of them have blossomed.

Carl Jenkinson, Calum Chambers and Kieran Gibbs have all struggled to make any sort of impression on the first team in the last two years, while Jack Wilshere, Alex Oxlade-Chamberlain and Danny Welbeck have all been maligned with injury. Meanwhile Theo Walcott and Aaron Ramsey have shown flashes of brilliance, but more recently have fallen away. Wenger was right to back this British core, but his choices have underachieved and placed his plan in jeopardy.

Sort out the injury worries

There will be no beating about the bush here: careers are being ruined at Arsenal. Danny Welbeck is the latest player to be ruled out for the best part of a year, following a strong recent trend of players such as Abou Diaby, Jack Wilshere, Tomas Rosicky and Alex Oxlade-Chamberlain. Some of these may be down to bad fortune but such is the regularity and scale of the problem that it would be a surprise if potential transfer targets weren’t being put off.

The result is a squad that can’t get settled and a set of players who find themselves constantly revving the engine only to stall whenever they seem to be recovering form. To give Arsenal credit, they have employed Shad Forsythe as Head of Athletic Performance Enhancement in an attempt to minimise the risk of players becoming sidelined, but for the moment this is a huge problem.

Although Arsenal failed to win any trophy between 2005 and 2014, at least for the first six seasons they failed in style. Built around Cesc Fabregas, Wenger’s side oozed class with its passing ability; while it may have proven ultimately unsuccessful, the fans could always claim to be watching some of the best football in Europe.

As it stands in 2016, nobody is quite sure what the driving force of this Arsenal side is. Wenger seems to have created an ineffective hybrid of the sort of counter-attacking side that beat Manchester City and Manchester United in 2015, combined with the occasional bargain-basement brand of tiki-taka. Neither seems to have been mastered by a side which seems unsure of itself. If Wenger could define this Arsenal team like he has done in the past, he might at least get the crowds back on their feet.

Arsenal’s 3-0 League Cup loss at Sheffield Wednesday was one of the more eminently forgettable moments of the season, but should be noted with caution. Gone are the days when Wenger could play a team of reserves, brimming with promise (and Carlos Vela’s scoop shots), who would brush aside lower-league sides aside with equal panache to that shown by the first team.

Having introduced thrilling youngsters from Vela to Van Persie and Clichy to Cesc, Wenger used to be famed for his nurturing of youth players, but he seems to be losing ground to Pochettino and Spurs. Wenger hasn’t been neglecting these duties, with Hector Bellerin his latest success, but the club is currently brimming with talent in the academy.

With players such as Daniel Crowley, Krystian Bielik, Chris Willock, Gedion Zelalem and Jon Toral impressing on the fringes of the squad, Wenger has options with which to reinvigorate the squad (or at the very least brighten up next season’s League Cup campaign).

There appears no doubt that if you were to spend a week at Arsenal, you’d have a lovely time. Between Per Mertesacker offering you a tour of the grounds and Santi Cazorla regaling you with tales from the treatment room, Theo Walcott would probably buy you lunch. Arsenal is a family club, and that’s great, but Arsene Wenger needs to be more ruthless in the dressing room.

When Wenger arrived at Arsenal he changed a great deal, but he inherited a side with great mental strength. Players like Tony Adams, Martin Keown, Lee Dixon and Ray Parlour didn’t need to be told when it was a derby, and it must be remembered that the key players in the ‘Invincibles’ side – Patrick Vieira, Ashley Cole, Robert Pires and Thierry Henry – all arrived at the club when this old guard were present to guide them. There’s no doubt Wenger would do well to tap into that mindset once more.

For a man who claims he will only buy players who improve the squad, Wenger’s purchasing record is perplexing: for instance, strikers like Olivier Giroud, Yaya Sanogo, Park Chu-Young, Marouane Chamakh and Gervinho are interesting additions to a list that included Dennis Bergkamp, Nicolas Anelka, Thierry Henry and Robin van Persie.

Wenger has already begun breaking the mould he designed with the signings of Mesut Ozil, Alexis Sanchez and Petr Cech, but these three were all essentially rejected by their clubs, rather than prised away by Arsene.

Perhaps he felt sympathy with fellow clubs trying to hold onto their stars when he himself has experienced that same pain, but you don’t have to go too far back to see who Wenger could have signed with a little more will and persistence: Luis Suarez and Gonzalo Higuain, apparent former targets of Wenger’s, are now two of the most prolific strikers in the business.

To some extent, it can be argued that making big-name purchases runs contrary to Wenger's ethos - but the captures of world-class players like Ozil shows that he can change. If he is to keep up with his title rivals, he will need more big players - and more big changes.