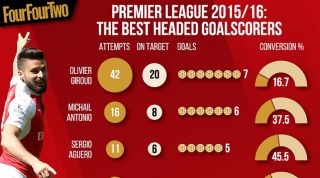 Stick it in the mixer! When you've got one of this lot in your team, that looks like an eminently sensible policy.

We've created this infographic to show which players were the most prolific with their head in the Premier League last term.

Arsenal's Olivier Giroud leads the way in terms of goals scored but has a relatively low conversion rate, with Sergio Aguero impressively scoring almost half of his headed attempts, and that's despite him not being the tallest.

Andy Carroll barged his way into joint-third place, but that wasn't enough to persuade Roy Hodgson to get him on the plane (or Eurostar) to France this summer.