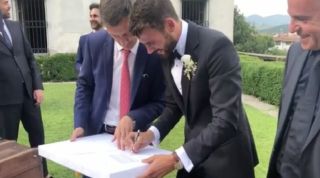 Almici tied the knot with his new wife at the weekend, but the 25-year-old's football future was still up for discussion on his big day.

Fortunately for the Italian, his agent got him a very special present.

Giuseppe Reso was tasked with finding the right-back a new club closer to his home city of Bergamo, for personal reasons.

Since 2011, Almici has had eight different loan spells while he has been owned by Atalanta, but now he's secured a permanent spot at a new club.

Reso presented him with a contract and a Hellas Verona shirt straight after the wedding ceremony, and the Italian was visibly moved by the surprise gift to cap a brilliant day.