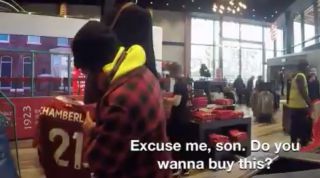 The former Arsenal midfielder went undercover into the Liverpool club shop to try to sell one of his own replica shirts – but his pitch produced mixed results.

Egged on by legend Robbie Fowler, Oxlade-Chamberlain approached one youngster to ask if he wanted the shirt... but was turned down. "He's gonna be a superstar," the Reds man said in reply.

But the seemingly world-weary Kopite, still not realising who he was talking to, duly retorted: "One day. He's been saying that for 10 years."

"Been saying that for 10 years about Chamberlain? That's since he was 14," the wounded star responded.

It’s finally here! Watch the 2nd instalment of our ‘School of Scouse’ to find out what happened when we joined forces with legend to guide new players , & through MBNA's bootcamp. November 24, 2017