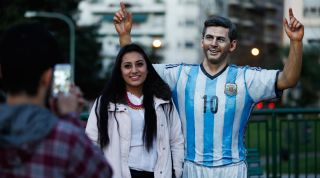 Starting the competition as second favourites to lift the trophy, Argentina will win Group F barring the spread of a contagious illness, or a devilish riddle through their camp.

Nigeria’s pre-tournament friendly against Scotland was overshadowed by the reported threat of match-fixing. Goalkeeper Austin Ejide’s integrity was called into question after he clawed the ball back into his own net, but coach Stephen Keshi vouched for him, stressing that the mistake was the result of incompetence on crosses rather than malice.

Iran boss Carlos Queiroz has declared that his side "won’t get through" as they are so underprepared for the competition. With a lack of organised warm-up matches and many players not being released by clubs, Iran have been forced to do most of their training by email. Queiroz is still waiting for confirmation that Masoud Shojaei has dribbled around some cones.

This is Bosnia’s first World Cup, and as such they can expect a significant amount of hazing. As is traditional, they will have to play their opener against Argentina wearing dresses while hoping to avoid the fate of World Cup 2010 debutants Slovakia, whose players found their boots had been filled with superglue.

While Argentina’s prowess is well known, Nigeria are dependent on which Nigeria turns up. It’s likely to be the Nigeria in Africa.

Keshi has quit the Nigeria job more than 50 times but remains Nigeria boss, although he is still waiting for his first pay cheque to arrive. Keshi is expected to resign from the post after the World Cup, before taking it up again several days later.

Iran boss Queiroz, formerly Sir Alex Ferguson’s assistant, has already told his team via a group text that they are pretty much out, and has a calendar counting down the days until he isn’t Iran boss. Sir Alex once described Queiroz as "the closest thing you can be to Manchester United manager without actually holding the title". David Moyes was to prove him wrong.

Argentina boss Alejandro Sabella was nicknamed ‘Sloth’ as a player due to his lack of speed, three toes and tendency to sleep between 15 and 18 hours a day. His likes include Lionel Messi and attacking. His dislikes include Carlos Tevez and defending.

Bosnia and Herzegovina doesn’t fit in the last 16 space on your wallchart.