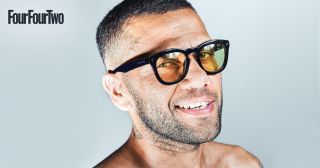 The Brazilian right-back lifted six La Liga titles and three Champions Leagues during a trophy-laden eight seasons at Barcelona before spending the 2016/17 campaign with Juventus, with whom he won the Double and reached a fourth European Cup final.

Alves was widely expected to continue his insatiable quest for silverware at the Etihad Stadium this season by reuniting with his former Camp Nou coach Pep Guardiola.

But the 34-year-old relocated to the French capital instead – teaming up with fellow countrymen Neymar, Thiago Silva, Marquinhos and Lucas Moura – and admits he had to put his family and friends first when choosing between Paris and Manchester.

Speaking exclusively in the December 2017 issue of FourFourTwo magazine, he says: “It was a combination of a few factors. I have many friends at PSG, my partner had lived in Paris and she adores the city, and the club has huge ambition to evolve and get bigger.

“I had already taken the decision to join Juventus without looking around first and it kind of harmed some people close to me. It wasn’t very easy to find a flight from Turin to see my kids in Barcelona. For my partner it was also harder to find work – there were not as many job opportunities for her in Turin.

“There were lots of things to consider, and they drove me to PSG. Guardiola was the main reason, above all others, that I was considering going to play for Manchester City. In the end, there was an opportunity to join some very good friends at PSG, in an incredible city and at a club that has great potential. I know I can help to add some positive things to this club that go beyond football.

“It made more sense for me to pick Paris over Manchester on this occasion, but I don’t hide my admiration for Pep and my will to play in the Premier League in the future.”

READ THIS NEXT Alves: "I pretty much had an agreement to sign for Liverpool in 2006"

Read the full interview with Dani Alves in the December 2017 issue of FourFourTwo magazine – a strikers special which features interviews with Gabriel Jesus and Alvaro Morata, and counts down the 30 greatest Premier League forwards ever. Also this month, we meet the father and son working wonders at Harrogate Town, find out if 3G pitches are the future of the Football League, and hear about the turmoil Tony Adams went through before, during and after Euro 96. Order a copy now, and then become a subscriber!