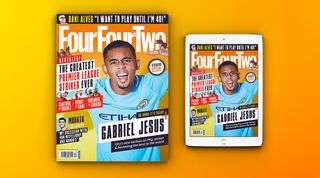 Young or old, it’s hard to deny the universal appeal of those players whose job it is to score goals. We grow up wanting to be them. Just ask Gabriel Jesus, who dreamed of following in the footsteps of Ronaldo while kicking a football around Sao Paulo.

Our celebration of the game’s best strikers opens with the Manchester City forward talking about his quest to become the best player in the world and win the World Cup.

We also speak to Alvaro Morata, who swapped Real Madrid for Chelsea over the summer because Blues boss Antonio Conte “went to the death” for him. Finally, we count down the Premier League’s greatest ever strikers. We analysed the data, asked the experts and formulated the final list, but have we hit the target or scuffed the ball horribly wide?

He’s been described as the best young player since Messi, Ronaldo’s heir apparent for Brazil and a future World Cup and Ballon d’Or winner. Can Gabriel live up to the hype?

You're the manager, your dad's the owner...

With Harrogate Town eyeing promotion to the National League for the first time, the family business is booming for Irving and Simon Weaver. Just don’t mention budgets...

The Spaniard’s switch to Stamford Bridge already looks like a masterstroke, and now he’s finally the top dog in town, he’s out to prove that there is life after Diego Costa.

Bouncy balls and pratfalls: that’s all Astroturf’s good for, right? We watch Maidstone host Bromley – two teams playing on plastic and competing for National League play-off places – to see if 3G pitches are still a standing joke or the future of the Football League.

Tony Adams tells FFT about his turmoil in the build-up to Euro 96, the horror of his bender after England’s exit, and how Paul Merson of all people helped him sober up.

The best Premier League strikers ever!

As English football enters a new golden age of goal machines, FFT names the greatest strikers of the Premier League era. We've based it not only on the number of goals they've scored, but also their success, style and the legacy that they’ve left behind.

PSG’s former Barcelona right-back Dani Alves answers your questions in this month’s One-on-One, including: How did Barça keep battering Arsenal in Europe? Why did he snub Pep Guardiola and Manchester City? And can he still milk a cow…?

Pepe opens up about his successful career at Real Madrid and challenge with new club Besiktas, Gus Poyet talks FFT through his season-opening stunner for Chelsea against Sunderland, and Carlton Palmer explains his love of canal-boating and herbal tea.

Underrated in an era of Matthews wizardry and often forgotten since, Tom Finney was England’s most complete talent – so why should we care? Plus, we learn the bizarre history of Fulham and remember seven of the best World Cup qualifying play-off ties.

FourFourTwo Performance speaks to Manolo Gabbiadini, who explains how to stay calm in front of goal and cope under pressure. We also hear why Southampton have hired a hamstring guru, try out some battle-ready shin pads and get taught a few mobility exercises that will help to relieve stiffness the day after a gruelling match.

Grab it now: available in print and on iPad and iPhone from Wednesday, November 1. Subscribe to FourFourTwo HERE!