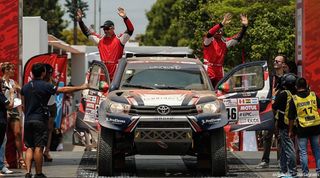 Villas-Boas, whose uncle completed the race between 1982 and 1984, left Shanghai SIPG in the off-season to compete in the formidable rally.

The first 35km stage through Pisco's sand dunes on Saturday was nothing short of treacherous, but Villas-Boas finished unscathed.

On Sunday, Villas-Boas and his co-driver Ruben Faria battled through more dunes in their Toyota Hilux as they reached San Juan de Marcona, and are now 45th in the overall standings.

Frenchman Cyril Despres of Peugeot is the overall leader, and heads the rally by 27 seconds. Stage three will take place on Monday.

The grand race, which was re-located to South America in 2008 due to safety concerns, has claimed the lives of 70 racers since its inception in 1978.

Villas-Boas has prepared for the behemoth race extremely seriously – according to Reuters, the 40-year-old revealed last week how he rented an altitude tent 13,000 feet above sea level to brace himself for what was to come.