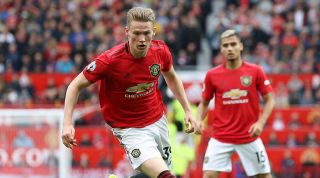 The best of a bad bunch at the end of 2018/19, he had a good pre-season, spoke well in interviews and earned the trust of his manager as he started ahead of Nemanja Matic. That he wasn’t slaughtered by his own fans showed how much the 22-year-old has improved in the last year. McTominay was beloved by Jose Mourinho, but he’s blooming under Ole Gunnar Solskjaer.

Physically, he’s more muscular, while mentally he’s more confident of his own place in the team. He’s attitude is flawless.

But the weakness for United in their four previous games was in midfield, where McTominay plays in a three, usually with Paul Pogba and one other. Chelsea stormed through it on the opening day… and lost 4-0. Wolves surged back to draw a game they should have lost, and Crystal Palace beat United at Old Trafford.

Pre-match, Leicester’s midfield looked better on paper. On the grass, where it matters, United won that contest for the middle. They worked harder and covered more ground. McTominay doesn’t have Pogba’s quick feet to get out of a tight situation with two or three players around him, but he’s steady, reliable and tends to shine against the top teams. He was United’s best performer against Barcelona at Old Trafford in April, and acquitted himself creditably against PSG and Liverpool too.

On Saturday, he excelled without the injured Pogba alongside him. Those who predicted United’s midfield would be overrun were wrong. Alongside Matic, McTominay shifted forward a touch so he was involved in the ‘defence to attack transitions’ which feature heavily in Solskjaer’s laminated tactics’ folder.

Coach Kieran McKenna watches him like a hawk and instructs him during games, but that’s only because he wants him to improve. He wants him to not lose possession, as he did to Hamza Choudhury in the first half; to do more of what he’s good at and less of what he shouldn’t. It’s not rocket science.

McTominay hit a beautiful ball forward to the one player who appears to have more energy than him, Dan James. The Scotland international cajoles those around him throughout. United don’t look bad defensively, in part because he was breaking up play in front of his backline so well: blocking, bashing into Ben Chilwell, tackling and closing space against a team who enjoyed more possession.

Solskjaer’s side limited Leicester’s vaunted attack as James Maddison was fed scraps, and held onto the lead rather than conceding to draw as they had done twice this season. McTominay was the one hollering at team-mates towards the end of the game as United held on for three points and a clean sheet.

The result means they have conceded only four goals in five matches – two fewer than a Manchester City side being hailed as slightly better than Brazil in 1970, and two fewer than Tottenham who last won the league nine years before 1970.

David de Gea signing a new contract is a positive, too. The Spaniard took his time to accept the vast contract offered to him, but United get to keep one of the best five goalkeepers on the planet.

The Spaniard has played 366 games for United, exactly the same as Ole Gunnar Solskjaer, but he now has the opportunity to become a top-five appearance maker for the club. It would be a travesty if he finished with only one league title in that time. While De Gea doesn’t say much publicly, he talks a lot about how great it was when United won the league and Deansgate was a sea of red.

The current team are a long, long way from that level, but there’s still room for optimism. Saturday wasn’t a top performance – United have yet to put one in over 90 minutes so far – but it was a top result and McTominay’s contribution urged his manager to say: “He’s improving, isn’t he? I thought he was excellent. He’s a leader.

“He lost the ball a couple of times, which you expect because he’s just learning his new role as a sitting midfielder. But he goes into the tackles, challenges and fights. If teams are trying to intimidate us, he’s the first one in. I wouldn’t want to get into a 50-50 with him.”

Some praise for a lad some thought would be shown the door when the Norwegian arrived 10 months ago because he was attached to Mourinho’s umbilical cord. Instead, the Lancaster-born midfielder looks future captain material.

Mourinho was right when he stressed the importance of McTominays. United need more like him: a key face in team establishing a new identity under Solskjaer. Not just because he’s a home-grown Lancastrian who has been at the club since he was 10, but because he’s a decent footballer who brings balance and a steadying influence to the side.

Not every player can be a star, and McTominay doesn’t crave his name in lights. But let’s face it: when you’ve spent your formative years watching Morecambe play, a street light would be blinding.

Darren Fletcher, who was in the directors’ box on Saturday with his sons, was like McTominay – though Fletcher did turn out for a Scotland side which won a game once in a while.

United’s midfield still looks short of quality, but it was encouraging to see Fred return.

Solskjaer’s team played four games in 34 days up to Saturday. They will play seven in 23 following the weekend. There will be chances for all against varied opponents from A to… er, R: Alkmaar, Rochdale to Newcastle, Arsenal to Astana. If you’re Fred, then you want to be featuring, picking your confidence up off the floor and showing fans that you’re a decent midfielder.

If you’re McTominay, who adapted fine alongside Fred after the Brazilian replaced Matic, then you just need to keep on keeping on. Getting those games under your belt, becoming more experienced, more trusted and a more important figure in the future of Manchester United. He’s going the right way about it.