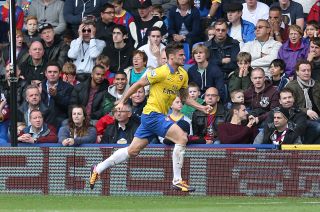 Despite having the pace and guile of Kieran Gibbs at their disposal down the left wing, the Gunners clearly favour attacks from the right. Bar Aaron Ramsey, Bacary Sagna was Arsenal’s most prolific passer on Saturday afternoon. The France international found a team-mate with 69 of his 78 passes, registering a completion rate of 88%. Most tellingly, 24 of those successful exchanges were in the attacking third. Only Ozil and Ramsey racked up better numbers in advanced positions. Because Jerome Thomas did little to support the isolated Dean Moxey, Sagna had the time and space to whip in six crosses and create two goalscoring opportunities. He was also involved in two of the most frequent pass combinations, finding Ramsey 18 times and Serge Gnabry 17.

2. Without Flamini, Arsenal are exposed

Arsenal’s back four must have been relieved to see the Frenchman’s wavy locks back in front of them after he was so clearly missed against Dortmund. Unfortunately, his return to the side lasted just eight minutes. His head was fine, but his groin wasn’t. On came Serge Gnabry to join the Gunners’ advanced midfield trio, pushing Ramsey back alongside Mikel Arteta. Ramsey does his bit to help out the rearguard, but he doesn’t have the same discipline and defensive instincts as Flamini. The visiting defence limited the hosts to just two efforts inside the box, but the Eagles managed 11 from outside. Had it not been for two spectacular saves from Wojciech Szczesny when Arsenal were just 1-0 up with 10 men, this game could have ended very differently. Flamini’s positional sense, ability to smell danger and physicality would have countered Palace’s long-range efforts.

3. Giroud is not just a pretty face

When Arsenal were down to ten men following Arteta’s sending off, they were heavily under the cosh. It wasn’t always easy to pass their way out of trouble and Giroud offered them an outlet. He went up for eight aerial challenges, winning two; these may not be great stats, but these contributions have to be measured by their effect, rather than success rate. He was a nuisance – constantly jostling with Palace’s centre back pairing of Danny Gabbidon and Damien Delaney. They just couldn’t pin him down. The French striker managed five attempts on goal, two of which hit the target, including his goal. The header that hit the net was not the most impressive part of this goal; it was his delicious first time pass to set Ramsey free. The Welshman drove at goal, worked the space to dink a pinpoint cross onto the head of Giroud who made no mistake from close range. Had his finishing been sharper he would have scored more, but like any good striker he kept getting in good positions and demanding the ball.  He didn’t let his misses deter him. Giroud might be a pretty boy, but he can mix it with the bruisers.

4. Palace have a useful striker, they just don’t know it

Marouane Chamakh may have become a figure of fun in the Premier League, but he could be effective if used in the right way. The Moroccan striker won six of 12 aerial battles – the best record on the day and not bad when you consider he was up against 6ft6 Per Mertesacker. Lumping it up to him isn’t pretty, but when you don’t have the technical players to play football you have to play to your strengths. His own pass completion rate was just 67%. It’s not just up to Chamakh to win the headers, his team-mates need to get up the pitch and support him. If Palace played off the former Arsenal forward they could be in business, winning knock downs in and around the box.

5. Youthful fearlessness can win the day

With Flamini’s departure, Arsenal lost steel in the middle of the park, but in Gnabry they gained width, speed and daring. Playing without fear, the young German had one thing on his mind when he got the ball – attack Moxey. He was only on for 61 minutes having been sacrificed for Jack Wilshere after Arteta's dismissal, but he still managed to make 19 passes in the attacking third, 13 of which found their target. Most importantly, it was his trickery that drew a foul from Adlene Guedioura inside the box. Referee Chris Foy pointed to the spot and Arteta found the back of the net to give Arsenal the lead.