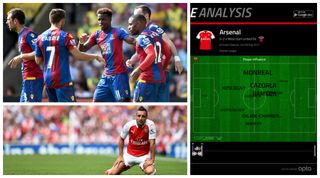 The tentative optimism that fizzed through the Emirates Stadium before the West Ham match now feels like a cruel joke. Another opening day disaster, another tediously familiar tactical strategy, and Arsenal’s Spring resurgence begins to resemble a purple patch disguised as progression.

This response is exaggerated, but defeat at Selhurst Park – where Crystal Palace will pose a similar threat to West Ham - and this deflating opinion could seep into the mindset of Wenger’s players.

Key to West Ham’s victory was counter-attacks focusing heavily upon distribution down the flanks and a narrow defensive structure that crowded the centre of the pitch. Arsenal are relentless in their pursuit of creativity in central areas, as exemplified by their use of inverted wingers; predicting their strategy is simple.

Alan Pardew’s default tactics are perfectly aligned with the approach taken by Slaven Bilic. Last season 74% of Palace’s attacks came down the wings as they focused on counter-attacks through Wilfried Zaha and Yannick Bolasie (22 dribbles per match, most in division). This focus could exploit the space behind Arsenal’s full-backs if Yohan Cabaye finds the time and space to launch long passes into these areas.

Furthermore, Pardew ensures that Crystal Palace sit in deep and narrow banks, patiently awaiting an opportunity to win the ball and pounce forward on the counter. Arsenal’s low tempo possession will do little damage, and could lure them into vulnerably advanced positions. Crystal Palace averaged less possession (40%) than any other team in the league last season, and recorded just 36% at Norwich on the opening day.

If Arsenal’s difficulty breaking through a tight throng of players results in desperately advanced positions, Bolasie and Palace could compound Wenger’s misery.