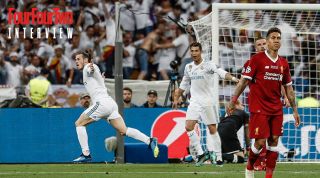 The Puskas Award was launched in 2009 to hail the year’s most spectacular strike, with former winners including Cristiano Ronaldo, Neymar and Zlatan Ibrahimovic.

So eyebrows were raised when Mohamed Salah topped the public vote for his solo effort against Everton, and Bale admits that even he was a little taken aback.

Speaking exclusively in the January 2019 issue of FourFourTwo magazine, out Wednesday, the Welsh wizard says: “Yeah, I was surprised by that, to be honest. What can you say? It makes the award look a little diminished, although it was obviously a great goal by Salah.”

Super-sub Bale had been on the pitch for only three minutes when he converted Marcelo’s cross, capturing his and Los Blancos’ fourth European crown in five years.

The 29-year-old explains that he instinctively knew the ball was net-bound as soon as it had left his boot, and unsurprisingly ranks the goal as the best he’s ever scored.

“It was instinctive,” says FFT’s Goal of the Year winner. “I got my body positioned correctly, got my footwork right, and caught it perfectly. When you catch the ball perfectly, you know it’s on target.

“You just have to hope the keeper doesn’t make an unbelievable save. So as soon as I hit it, I knew it had a chance of going in. If you watch it, you see my head turn straight away. I knew where the ball was going.

“I think you’d have to say that [it was my best goal]. There haven’t been too many like that! I did love the one in the [2014] Copa del Rey final against Barcelona, but as this one was on such a big stage – the Champions League final, the biggest game in club football – and technically it was the winner, I’d have to say that it’s the best.”

Read the full interview with Gareth Bale in the January 2019 issue of FourFourTwo magazine. The 2018 awards special features interviews with Man of the Year David Silva and English Player of the Year Lucy Bronze, and speaks to Ivan Perisic about Croatia’s World Cup heroics. Plus, we go One-on-One with Michael Carrick, and hail Gareth Southgate, Virgil van Dijk and Comeback of the Year winner Hardlife Zvirekwi, who returned to action despite having a hand amputated.