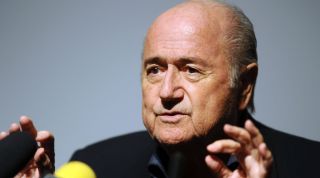 Along the lines of a letter stuffed with faux outrage, the kind written to TV companies about Lady Gaga’s undies on display at a mere eight in the evening, Real Madrid are thanking Sepp Blatter from the bottom of their Clásico-losing hearts.

An awkward few days between Saturday’s defeat and another league clash on Wednesday could have been filled by talk of Carlo Ancelotti’s tedious first-half tactics in the Camp Nou, or whithering about Gareth Bale.

Instead, though, Madrid had the chance to get themselves in a desperate flap about the FIFA president declaring Lionel Messi was his preference in the Big Two battle, making a quick gag about hairdressers in the process. To be fair, it’s something LLL does most weeks for a cheap laugh.

AS had Tomás Roncero fuming into a camera about Blatter’s terrible mistake, while Marca dedicated five pages of Wednesday’s edition to the tit-for-tat affair that has grown-up, pompous letters being written to and from various federations by men in suits with clearly too much time on their hands.

Indeed, there wasn’t too much talk at all in the papers about the midweek visit of Sevilla in the league, and it’s not hard to see why considering it is unlikely to be much of a contest. Sevilla have not won away in the league since September 2012, and it’s fair to say that the club have a bit of a stigma about that now.

That clash at the Santiago Bernabéu kicks off at 10pm, along with Osasuna's hosting of Rayo Vallecano, a 12-pointer if ever there was one at the bottom of the table. Valencia, meanwhile, have the fun of facing their ever-chirpy supporters just a few days after the trashing by near-neighbours, Villarreal.

And with yet-to-win, bottom-of-the table Almería in town, the comedy possibilities of another sporting disaster for Miroslav Djukic in the Mestalla are endless. “I can’t ask the fans for anything because in reality we haven’t done anything,” admitted the team’s Serbian boss.

The biggest danger for Valencia is that their defence remains a shambles, having shipped 17 goals this season. But they'll be up against an opposition who aren’t all that bad in front of goal, having bagged the same number as Champions League dreamers Real Sociedad (11).

As it happens, La Real are also in action with a trip to Valladolid, who enjoyed a handy win at the weekend after a poor start to the season. The Basque side will be hoping to continue their reboot in the league with a third victory in a row.

Two games were played on Tuesday. The first saw a goalless draw between Espanyol and Málaga, a couple of clubs looking for a quiet life after awful results at the weekend. In the late game, Barcelona travelled up to Vigo to take on the team led by old boy, Luis Enrique. The result, however, was an all-too-familiar 3-0 win for Barça, despite a plucky performance from Celta in front of goal.

The game did see Messi failing to score for his third league game, though, a true footballing crisis if ever there was one. Especially in the Spanish capital, where anything is being used to divert attention away from a flagging Galacticos III project.