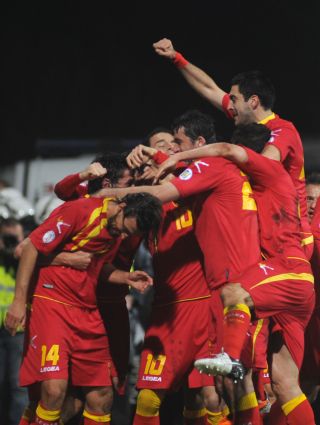 1. They're having an injury crisis

A nation of just 600,000 people - a population considerably smaller than Leeds - obviously won't have a very large talent pool, so every injury is a huge blow, and the current injury crisis might be their biggest yet.

For the England match, they will be without their iconic captain Mirko Vucinic, first-choice keeper Mladen Bozovic and Marko Basa, commander of their defence. But the list of absentees doesn't end there: coach Branko Brnovic will also be missing the suspended left-back Vladimir Bozovic, defensive midfielder Milorad Pekovic and centre-back Marko Simic.

Miodrag Dzudovic - the defender kicked by Wayne Rooney in the Euro 2012 qualifiers, resulting in a three-match ban - is recovering from injury and only started full training on Wednesday. Their star man, Manchester City's Stevan Jovetic, is not yet fully fit.

As if to highlight just how desperate these absences have left Brnovic, two of the players he has called up for his latest squad - midfielder Nikola Drinčić and forward Andrija Delibašić – are currently without clubs .

2. They park the bus but have Ferraris up front

Ahead of his last match-up with England, manager Brnovic described his own tactics as 'parking the bus at the back, but with two Ferraris up front'. Those two were, of course, Vucinic and Jovetic.

With one of the two flash sports cars currently at the garage, and the other also somewhat in need of a tune-up, Brnovic is most likely to deploy strong centre-forward Dejan Damjanovic. The FC Seoul star scored as a substitute against England in March, with Jovetic operating just behind him.

"The most important thing for us will be not to concede," said defender Miodrag Dzudovic. "The English will become impatient and I don't have any doubts that our forwards will find a way to score. "

3. Their keeper has barely played since 2010

Vukasin Poleksic, who plies his trade with Hungary's Debreceni VSC, is set to start in goal. He missed both the 2010/11 and the 2011/12 seasons due to suspension relating to alleged involvement in match fixing. Last autumn he only appeared in three league matches for his club and later played a bit for their reserve side; this season he took to the field in a friendly international against Belarus in August – and that's about it...

4. Their centre-back's had drink problems

Defender Milan Jovanovic (not to be confused with the Liverpool flop of the same name) was involved in two separate drunken incidents earlier this year – one involving a physical attack on a police officer.

Red Star, his club at the time, offered to pay for his rehab but Jovanovic was subsequently released and, after spending five months without a club, signed for Lokomotiv Sofia in Bulgaria.

He was called up to the national team after a string of injuries left Montenegro with very few defensive options, and may well start the match.

5. Their star player has issues with identity

Stevan Jovetic caused a huge stir in his homeland earlier this year when he said to Serbian newspaper Sportski Zurnal: "Serbia and Montenegro, to me, are one. There's no difference: same language, same habits. I would love if we were still together and on the same team."

Montenegro has been independent from Serbia for just seven years, an this is therefore still a very sensitive subject, with many of Jovetic's countrymen taking offence at his words. He later said the quote was "taken out of context".

6. Their manager comes from a famous vintage

Having played for Buducnost, Partizan Belgrade and Espanyol, as well as 27 times for Yugoslavia, Brnovic hung up his boots in 2000. However, six years later he signed for FK Kom in Montenegro's top division and played there for one season, aged 40.

7. They dream of a little striptease

Mirko Vucinic has a habit of celebrating important goals by removing his shorts and pulling them over his head – he's done that on at least three occasions, including the match against Wales in 2010. He's now injured and unavailable to play, but if Montenegro were to score a decisive goal against England, what better way to celebrate than to repeat his routine as a tribute to their captain? The only problem is the sad fact that this kind of striptease is a bookable offence in football these days.

8. Punching above their weight is a national trait

Historically, Montenegrins were a nation of proud and fearless highlanders nested in the mountains (Montenegro means 'Black Mountain') who for centuries resisted powerful invaders. Bravery in the face of danger or adversity is the central part of their folk tradition and seen as the most admirable characteristic of their people.

Reflecting those ethical ideals, the country's coat of arms (as well as its flag) features both a double-headed falcon and a lion. The nickname of the national football team is 'Brave Falcons' (Hrabri sokoli) and they take great pride in the fact that they are yet to lose to England in three official matches.