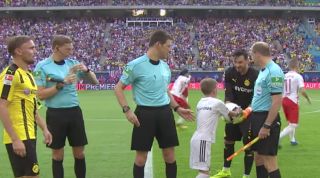 Dortmund's official YouTube channel has taken the opportunity to edit all of their first-choice goalkeeper's pre-game rituals into one video. It's certainly... unusual.

Before every match, when the two team captains go up for the coin toss, the Swiss goalkeeper creeps up behind the referee and either steals the ball off the officials or one of the mascots.

It seems as though Burki likes to get a feel for the ball before he's due to crack on with his 90-minute duties of net-minding – but we're still waiting for an official explanation from the man himself.