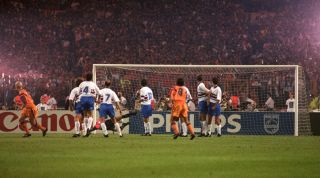 The current Everton manager still holds the record for most goals scored by a defender (with a net-busting 193 to his name), but this effort against Sampdoria in the 1992 Champions League Final is surely among his best.

With the game at Wembley stuck in a 0-0 stalemate deep into extra-time, Koeman thumped home a set-piece past Gianluca Pagliuca to win the Catalan club their first-ever European Cup. Kapow indeed.

Le Saux followed in the footsteps of Koeman with this spectacular strike against Brazil at Wembley in 1995, during Euro 96 dress rehearsal tournament, the Umbro Cup. Le Saux took advantage of a looping ball on the edge of the area after a Stuart Pearce free-kick, and produced a marvellous dipping shot over Zetti in the Seleção goal.

It was the then-Blackburn man’s only goal for England, but it's worth mentioning that he was no stranger to wonder goals – see his chip against Manchester United too.

After being beaten 3-1 by Jose Mourinho’s Inter in the first leg, Barcelona struggled to break down the Italians in the second. That was until the 84th minute when Pique executed a delicate turn, leaving Julio Cesar and Ivan Cordoba perplexed, before slotting home into the empty net.

It wasn't enough for the Blaugrana, but the centre-back's moment of magic was the perfect display of just how agile the modern centre-half has become.

The time-old "was it a shot or a cross?" debate has never been so fiercely contested. In the third-place play-off between Brazil and Italy at the 1978 World Cup, right-back Nelinho scored this curled shot with the outside of his boot from an acute angle, which left the great Dino Zoff sprawling in mid-air.

Nelinho himself later confirmed that the effort was a shot and not a cross due to the shape of his body. If true, then FFT doffs its cap. We believe you... honest.

Before he was a Champions League winner with Chelsea, Cahill was a humble young man honing his trade at Aston Villa. He only played 30 times for the West Midlands side but this acrobatic effort against bitter rivals Birmingham in 2006 (effectively relegating the Blues) ensured his place in club folklore for decades to come.

We’ve all seen Albert’s marvellous chip against Manchester United so many times, but it's easy to forget that he was one of the most technically gifted centre-backs in Premier League history.

Here's one you may not have seen, though: this neat pass-and-go dribble against Germany in the 1994 World Cup. As it was only a consolation in a 3-2 defeat the goal has been unfairly forgotten in the annals, but it still makes for enjoyable viewing.

While on loan at Sunderland in 2010, the former Manchester City stopper conjured the first goal in the Black Cats’ remarkable 3-0 victory over Chelsea. Picking the ball up 30 yards from goal and with seemingly no idea what else to do with the ball, Onuoha simply dribbled past three defenders and poked the ball under a helpless Petr Cech.

Harley enjoyed spells at Chelsea and Fulham early in his career before eventually finding his level with the likes of Burnley, Watford and Notts County. A reliable, if mostly unspectacular full-back on his day, his finest moment undoubtedly came in this 2-1 win over Aston Villa in 2003.

With the ball dropping to him some 40 yards from goal, Harley unleashed a rasping shot that soared over Peter Enckelman and sent Loftus Road (Fulham's temporary home) into raptures. It was the only goal he netted for the west London club, but if you're going to pick a moment it might as well be a long-range stonker.

We've already seen Onuoha & Co. striding forward in places they have no right to, and 12 years previously it was Arsenal captain Adams doing the same to give Gunners fans a moment to cherish at Highbury.

With Everton already 3-0 down and Arsene Wenger's men well on their way to claiming a first-ever Premier League title, Steve Bould chipped one over the defence for his stopping partner to sprint onto and batter into the net. Cue memorable commentary from Martin Tyler and a statue for Adams.

What list would this be without Roberto Carlos in it? One of the best left-backs of his generation, the little Brazilian came complete with a foot like a traction engine that was capable of bending space and time – as that free-kick against France in 1997 proved.

This improbable goal from near the corner flag against Tenerife was surely unintentional, but it proved just what the pint-sized maestro was capable of. The greatest striker of a ball in the modern era? With 76 career goals to his name it’s hard to disagree.