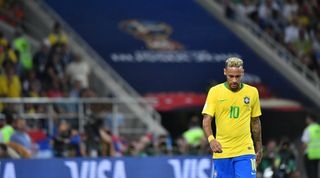 'The interview would be recorded and - in case any subject, question or answer is not considered appropriate - we could request that it be excluded,' was the gist of an email sent by Neymar Senior to the board of Rede Globo, Brazil’s largest network television, a few days after the 7-1 humiliation to Germany at 2014 World Cup.

He was pissed off with them.

The interview with Neymar Jr had been conceded under one condition: no questions about Brazil's defeat in that semi-final would be asked.

Not only were they actually asked, but they were also included in a video announcing the exclusive sit-down with the striker on leading TV show Fantastico. As controversial as it may sound, Neymar’s entourage had been consulted before by Globo for approval on stories. The player and the network shared a special relationship – a leaked, confidential 6,342-page lawsuit revealed Neymar had a contract with the broadcasting group, which gave it a series of privileges such as first-hand access to information and interviews.

In a way, Neymar was an employee of Globo – he was even listed among them when the media group celebrated their 50-year anniversary in 2015.

If Brazil’s most powerful media company, reaching around 100 million people every day, is by your side, what else would you fear? Nothing at all. It was a win-win situation for the forward.

That’s why when Globo didn’t respond to the email and aired the interview with the 7-1 questions, Neymar Senior felt so deeply betrayed. He realised he was on his own and could not rely anymore on them in his fight against an alleged media persecution to 'destroy' his son.

Since then, it has been Neymar versus the whole country.

Love him or hate him, the €222m forward always gets people talking. No one has been discussing how Brazil have raised their game on the road to the last 16 in Russia. Instead, everyone is concentrating on Neymar’s dives, his spaghetti haircut and insults to referees, opponents and even his own team-mates.

He’s definitely not making it any easier for Brazilian fans to stick by his side.

Believe it or not, they’re trying hard to. However, it’s safe to say some of them have already given up – there are growing reports of supporters across the country asking coach Tite to take him out of team and booing him in fan zones. It’s difficult to say exactly when he abandoned his personal mantra of ousadia e alegria (in English, daring and joy) along the way.

Neymar has not been able to control his temper. Unsurprisingly, memories of the 2016 Olympics have arisen. He has become a crazed footballer on the pitch in that home Olympics; angry at the world outside.

Globo’s lip-reading of his performance against Costa Rica in the 2018 World Cup revealed a man seemingly on the verge of a breakdown.

A respected pundit, Juca Kfouri, blames his behaviour on the people who surround him. “Neymar is still chasing his best form after three months out," he says. "Neymar is one of the most talented players in the world. Neymar has got pals that defend him bravely because they depend on him to have a lavish life. Alongside Neymar Senior, they do no good for him and prevent him from getting rid of his Peter Pan syndrome, refusing to grow up.”

Many in Brazil hold the impression that Neymar's parcas (a slang term in Portuguese for partners) are the main reason he has not matured and seems to live in a world apart from everyone else; a place where he is never questioned, his own Neverland.

One of the country’s most prestigious writers, Tostao, has criticised the No.10’s melodrama in the group phase.

“Tite needs to be tougher and more frank with Neymar and demand that he stops with the hissy fits, the complaining, the arguing and the diving, like he did in the penalty claim correctly denied against Costa Rica,” the 1970 World Cup champion wrote in his column in the Folha de Sao Paulo newspaper.

“His tacky off-the-field behaviour, usual in the celebrities’ world, is his own problem as long as it doesn't affect his play. According to lots of sources, Neymar prepares well for his games. That's what matters.”

Unlike Lionel Messi and Cristiano Ronaldo, Neymar monitors what compatriots say about him and has shown multiple times he doesn’t deal well with criticism. Neither do his friends in Russia, who have started another war with Globo after Brazil’s most popular commentator Galvao Bueno accused the striker of diving against Costa Rica.

One of them insulted Bueno and said he’s a piece of trash while others publicly squabbled with him.

Neymar Senior had to reportedly tell the band of hangers-on to rein in their attacks and has been mediating the conflict with the television network and working on a truce. The parcas did not get into any other rows during the Serbia game.

Bueno, on the other hand, dropped a hint to Neymar after the first goal scored by Paulinho. “Who passed the ball to Paulinho? The star of the team! Philippe Coutinho,” he said. At half-time, he praised Coutinho one more time. “Magical play from Coutinho, who has been Brazil’s greatest player at this World Cup.” Not even a word about Neymar.

Brazil’s camp has been doing every effort to protect the PSG forward from a new row with the media. As things stand before the game against Mexico, he's the only starting player who has not participated in a press conference since the beginning of the World Cup preparation, over a month ago.

He ignored more than 400 reporters in the mixed zone after the 2-0 win against Costa Rica. “Not today,” he replied to the requests for an interview.

Yet there's a strong view that the problem is those around him, rather than the player himself. “He [Neymar] is all right,” said former Arsenal and Valencia midfielder Edu Gaspar, the Brazilian federation’s coordinator in Russia. “He knows that he’s a really strong player. He’s improving in the competition so his mind is really clear.”

If Edu is indeed right, Brazilians will certainly find it easier to fall in love with Neymar. Again.