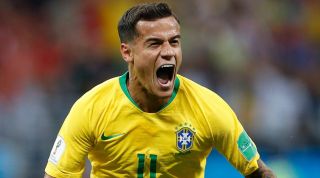 In 2007, Tite was still a long way from taking charge of the national team and could only dream of the post. On October 4 of that year, a list was being released. In truth, very few people had ever heard of the names that featured on it when the Brazilian federation announced it late in that afternoon.

The list was Brazil’s roster, picked by coach Jorge Silveira, for the South American U15 Championship held in Porto Alegre and Bento Goncalves.

Despite the lack of interest among the fans, Silveira faced criticism for leaving one of the most alluring prospects of the country out of the squad. Rated very highly at Santos, he was already making three figures at the age of 15 after signing a lucrative image rights contract.

Sounds mad, doesn’t it? Until you understand that the player was Neymar, then it makes more sense.

Yet he was not called up by Silveira, who decided to bring in another future star: Philippe Coutinho, better known then as Philippinho. The coach had watched the No.10 from Vasco da Gama take responsibility and guide the team to their first international title. The exciting teenager was promptly courted by Real Madrid and labelled the “new Messi” by Spanish paper Marca.

Being Brazil’s most decisive man, ahead of Neymar and the rest of the country, is clearly not new for Coutinho.

While Neymar grabs the headlines and fights with the media, Coutinho has now become a central figure in Russia, taking the applause and being directly involved in three of Brazil’s four World Cup goals in the group stage – scoring twice and setting another one up over the first round. The 26-year-old has repaid Tite’s faith in him by providing the kind of spark and cutting edge that Brazil has been waiting for.

Tite has been a huge admirer of Coutinho for almost a decade. He had always dreamed about working with the Barcelona maestro and carried such thoughts since watching him for the first time in a 2010 friendly between Brazil and Iran in Abu Dhabi. The then coach of UAE club Al Wahda left the stadium amazed with what he'd seen.

“I attended that match and I said [to myself]: jogamuito,jogamuito [a mantra which he repeats whenever he sees someone playing very well],” he recalled in an interview to Folha de Sao Paulo newspaper. “He has a speed of thought and execution that impresses me. A creative player, too much [creative].”

Ten days later, he returned for a second spell as manager of Brazilian side Corinthians. First request? Coutinho, obviously. He was obsessed with the idea of bringing him to his side.

Tite’s brother Miro Bacchi revealed a few years later that, if the coach could choose any player in the world to work with, he would most probably pick the midfielder. Not Neymar, Gabriel Jesus or Marcelo. A reserved and low-profile man, Coutinho is still a work in progress for Tite.

When the two first met for a World Cup qualifier in 2016, the Brazilian coach tried him in a new position. “I want to generate more creativity in our midfield and doing it from the right. After two or three training sessions, I called him aside and asked him how he felt about this new role. He said he is feeling fine and had no problem with it,” Tite told reporters.

Coutinho gets easily embarrassed when hearing people praising him in public and doesn’t know how to respond to it. In the mixed zone after the 2-0 win over Serbia, he was asked on whether he’s been the player of the tournament in Russia, gave a thought for few seconds and refused to take the question.

His astonished reaction says a lot about him.

Many Brazilians say Coutinho is the new Rivaldo, a comparison to the role the shy and introverted former playmaker had in the successful 2002 World Cup campaign. A lot of people in his native country rate Rivaldo higher than Ronaldo, who drew much more attention from the media with his haircut and controversies on Brazil's road to conquer the world for the fifth time.

“I never like to speak about myself, it is not something that goes through my head,” Coutinho told reporters at the team’s camp in Sochi.

Brazil versus Neymar: how a superstar lost the love of his country

Like Rivaldo, Coutinho enjoys operating under the radar, has not had a media officer for several years and leaves all the talking to his right foot. “He’s wronged [in Brazil] because he’s been the man [at the World Cup] and he’s the less-talked-about player. He’s like Rivaldo in 2002”, ESPN pundit Xico Sa said.

At least the No.11’s fate doesn’t seem to depend on what Neymar does anymore.

For some time, it was an issue for his ambitions and international recognition. He could only feature in his natural position, cutting in from the left, and get into the starting XI when his long-time friend was missing. Fortunately, it’s not like that anymore.

He’s also slowly winning the fans over. In a recent poll in Brazil, asking who has been the best World Cup player, 26.8% of people voted for Coutinho; only 13.9% of them mentioned Neymar.

No surprise for those who have been watching him since the 2007 South American U15 Championship. Coutinho has been prepared for this since those days. He may not find himself comfortable in that situation, but he’s now Brazil’s leading protagonist. Get used to it.