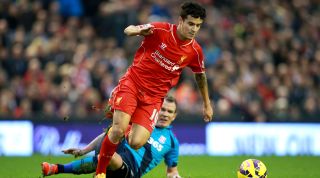 It was difficult not to be enthusiastic when Philippe Coutinho first arrived in English football. Before we’d even witnessed his majestic through-balls for onrushing forwards, there’s something immediately exciting about a Brazilian with the No.10 on his back and an ‘inho’ at the end of his name. It’s quite a billing. Coutinho’s immediate impact in the Premier League was positive.

He seemed perfect for facilitating the quick attacking of Luis Suarez and Daniel Sturridge, could play either from the flank or as a traditional No.10, and was capable of clever tricks and more efficient distribution into attack. He was an entertainer, and potentially a top-class footballer too.

Coutinho is still regularly considered one of Brendan Rodgers’ few major successes in the transfer market, along with Sturridge, although his impact hasn’t lived up to the initial excitement. Like at Inter, where he started promisingly but faded, Coutinho finds himself struggling for form at a point where he should be an established first-teamer, a dependable source of creativity.

Last season, he provided some important contributions in Liverpool’s title charge, particularly the late winner on the spin against Manchester City, but ultimately he was the least important member of Liverpool’s attack and midfield. Suarez, Sturridge, Raheem Sterling, Jordan Henderson and Steven Gerrard all enjoyed better campaigns, while Coutinho battled Joe Allen for the sixth spot.

The major problem, though, is that the Brazilian has been misunderstood. He’s widely regarded as an attacking midfielder, the type who can justify the No.10 shirt. In reality, he’s more comfortable in deeper zones, performing different duties.

In January’s Merseyside derby, a 4-0 Liverpool victory, Rodgers made an interesting selection in midfield. He played a 4-3-3 with Gerrard at the base of midfield (then a relatively unfamiliar role) with Henderson and Coutinho just ahead. This seemed a brave move: Henderson was excelling with his dangerous forward runs, while Coutinho was a creative player. Would Gerrard receive adequate protection?

The surprising answer was yes. Henderson had the energy to shuttle back and help, but Coutinho was equally useful. He put himself around, his tackles were prolific rather than consistently successful, but he broke up play extremely effectively, and also created chances.

He turned in a similar performance against Arsenal, again making plenty of tackles, and again creating lots of chances. The distance on those passes, in particular, was notable.

In a deeper role, his battling qualities became clear – this isn’t a fancy stepover merchant who cries off at physical challenges, but someone who has been forced to dig in. He’s fully capable of hard tackles, and doesn’t mind a scrap in the middle of the pitch. In a team full of technical players – and with Gerrard’s defensive qualities still up for debate – this is what Liverpool need.

Brazilians are often considered flair players, but Brazilian football has become highly physical and combative, and these days Brazil are better at producing hard-working midfielders than exciting attackers. Neymar aside, Brazil don’t have much in the way of attacking invention, but in midfield, they have the likes of Ramires, Paulinho, Fernandinho, Sandro, Luiz Gustavo – hard-workers, battlers. Even wide midfielders, like Willian, seem more functional than creative.

While through-balls remain Coutinho’s best weapon, there’s no reason he can’t play these passes from deep. Indeed, remember his good early form, and most of his assists were played over long distances, more like the type of passes Gerrard used to play for Michael Owen, rather than the intricate balls David Silva slides through for Sergio Aguero. In a deep position he can see more of the action ahead, and play more killer passes.

Assess Coutinho’s performance against Sunderland last weekend – a 0-0 draw – and you realise how limited he is when deployed between the lines. His passing completely lacks penetration (partly because of the lack of pace up front, granted) and therefore he created no chances.

He’s not great in terms of attacking, either: he kept losing possession when attempting to dribble past opponents, and his shooting is generally poor too.

A few weeks ago on Monday Night Football, Jamie Carragher assessed a Coutinho performance where the Brazilian was fielded as a No.10. Carragher criticised him – rightly – for continually coming short towards play, rather than remaining in a position to link midfield and attack.

But that performance was telling – Coutinho kept moving deeper because that’s where he does his best work. To fulfil his potential, he needs be understood properly. Despite his nationality and shirt number, Coutinho is anything but a classic Brazilian No.10.