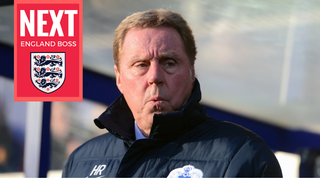 Harry Redknapp hasn't managed in his native country for 18 months, and his appointment to the England job would be about as much of a long-term fix as a Botox jab.

Yet his elevation to manage the team – the oft-discussed ‘root and branch’ changes to the game are best left to others – would make perfect sense.

Following the catastrophic defeat to Iceland at Euro 2016, England require an instant shot in the arm. As he proved at Portsmouth and Tottenham, Redknapp is an 'impact' manager who can galvanise teams immediately.

When he took over at White Hart Lane in October 2008, Spurs had only taken two points from eight matches. Gareth Bale recalled: "Morale was all over the place, but Harry was a great motivator who exudes confidence and enthusiasm." Tottenham skipper Ledley King added: "Harry reminded us that playing football could actually be fun."

Ah, fun. When, in an international tournament, was the last time that England players conveyed anything other than the feeling that they’d rather be having root canal surgery than playing for their country? That could all change.

Redknapp once commented in a Sun column: “You can argue about formations, tactics and systems forever, but to me football is fundamentally about the players.”

Although he once claimed “I don’t do tactics”, the 69-year-old is actually tactically adept, and shifted his formation around at Tottenham to get the best out of Gareth Bale, Luka Modric and Rafael van der Vaart. The Dutchman expressed relief that Redknapp never adopted the “clipboard and lectures which bored many of us at Real Madrid”.

But it’s fair to say that Redknapp’s key strength lies in player motivation. Mavericks including Paolo Di Canio (West Ham), Paul Merson (Portsmouth) and Emmanuel Adebayor (Tottenham) have all claimed that they played the best football of their careers under him.

Redknapp is ideally suited to lift the spirits of Raheem Sterling and Harry Kane following their disappointing displays in France, and massaging those other egos within the England dressing room.

He understands the mindset of English players. No Don Revie-style dossiers for ‘Arry. No Fabio Capello-ish morning ‘briefings’ either. And certainly no Roy Hodgson hand-wringing and fudging about team selection and formation.

Redknapp doesn’t favour brain-sapping analysis of the opposition either, and tends to keep team meetings brief, simple and direct, which fits in well with the average attention span of English players. “As long as every player knows his role in the team, it’s job done,” was how he summed up his thoughts on those get-togethers.

Humour plays a large part in Redknapp’s approach, and he isn’t averse to allowing his players some ‘nocturnal unwinding’ once in a while. More human, less robotic. It might appear a regressive, anti-intellectual outlook, but as Terry Venables after Euro 96 said: “You get nothing out of uptight players.”

Redknapp would be free of those pesky wheeler-dealer transfer accusations which annoy him intensely, and he could travel around to watch players and chat to journalists as often as he likes. The London-based press have always liked him, after all.

At 69, he’d relish the short, intense bursts of managing England, rather than the daily grind of club management.

Bring the smiles back

In less than two months, the national team face a tough trip to Slovakia to embark on their World Cup 2018 qualification bid.

Its players need to look forward to playing for their country, relax and bloody well smile once in a while. With Redknapp concentrating on man-management and bringing back some optimism, England could actually flourish with the wily old fox in charge for a two-year joyride, and a young apprentice by his side.