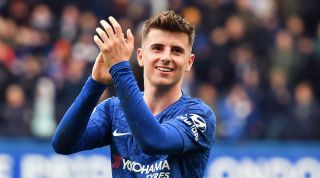 Mason Mount’s form lately has really been excellent. In fact, he was arguably Chelsea’s best player in the weekend’s win over Tottenham, having been involved in almost everything his side did well.

As he had been against Manchester United, five days before. Chelsea lost that game, but on a different night Mount might have helped them win it. The first half chance he created for Michy Batshuayi, having cleverly found space in the defence's blindspot, definitely should have been converted. And, although, VAR correctly disallowed Oliver Giroud’s header, the quality of the cross Mount provided made Stockley Park's intervention a desperate shame.

But it leaves him in an interesting place. The expectation is for young players to be running on fumes by now. Unused to the hard running of the Premier League, winter is supposed to leave them dead in the legs. Not Mount. He’s playing his best football of the season; his runs are smarter, his final ball is better, his little bits of skill are that much more imaginative.

How about that disguised touch beyond Jan Vertonghen on Saturday lunchtime? What bright and original thinking that was.

So, the perception is of a player adapting well to top-flight life and this recent burst of form was timed nicely ahead of Chelsea’s Champions League tie against Bayern Munich last night.

Timed well, because context is going to be very important for Mount. He’s a player with a very traditional skillset. Intelligent off the ball, creative and dangerous in possession, and a willing presser. Those are all essential qualities from a coaching perspective, but they don’t draw clicks and likes in the YouTube era, and they don't necessarily allow a player to stand out.

The implication being that Mount’s reputation – true appreciation for what he is - will likely depend on his abilities showing up well in exactly this sort of fixture. What will matter is not whether he can perform balletic roulettes or snapping Cruyff turns, but how well he constructs his passing triangles and how he's able to forage for influence in the tiny pockets of space.

Against sides of Bayern’s calibre, in games which are contested on extremely fine margins, there's no room for gratuitous skill and needless expression also has very little currency. That suits Mount. His quality is in his core as a footballer and occasions like Tuesday night tend to focus attention on those abilities specifically.

Ultimately, that was the case. Bayern were mightily impressive at Stamford Bridge and they deservedly have this tie in a vice grip. In spite of that dominance, though, Mount still showed up fairly well in the contest. There are still criticisms to make and flaws not to disregard, but his involvement was encouraging. He didn't quite emerge with his reputation enhanced, but it wasn't diminished either. It left those watching feeling quietly confident; not under all illusions, of course, but satisfied that Mount is on track and heading in the right direction.

Had he not be facing an opponent with Alphonso Davies’ acceleration, he might have found himself through on goal in the first half after a well-timed run. That's an intriguing trait, because he does slip away from his markers and into space extremely well. Even in this kind of company, it seems.

Benjamin Mendy exclusive: "When I first met Guardiola, he walked over to shake my hand but just gave me a little kiss"

And, although he would ultimately rush the resulting shot and slash it harmlessly wide, it was his press in the second half which led to a rare Bayern mistake, an interception, and a good chance.

In the general sense, Mount may not have been brilliant or outstanding on Tuesday night, but he was prominent. Both in the sense of being his side’s most likely source of a goal, and also in terms of his performance's general tone. He was part of the game, a factor within it and, while that may sound like contrived praise, it’s relevant because of how many young players have vanished in that sort of situation in the past. How many have just been swallowed by the vastness of an occasion and then spat back out in the direction of the substitutes’ bench.

The problem in that scenario isn't bad performances, it's a lack of production. It's not errant passes, bad touches, or mistimed runs, but outright anonymity. A failure to even be in the game, an inability to even exist within it.

That certainly wasn't the case with Mount. Quality of contribution will always be the true gage of Champions League readiness – and, in fact, general evolution – but the ability to be relevant is very important too. In time, experience will give him a softer pulse at critical moments and the wisdom to make better decisions. Exposure to the continent’s elite will also take away their aura and that's a valuable part of any education. Next time he finds himself 20 yards from Manuel Neuer's goal, on an angle and on his wrong foot, no doubt he'll evaluate that opportunity with more success.

For now, though, this was still an encouraging night. Not for Chelsea, but for Mason Mount. It was another basecamp within his career. An evening when he didn’t quite execute as he might have hoped, but when he still looked like he very much belonged.