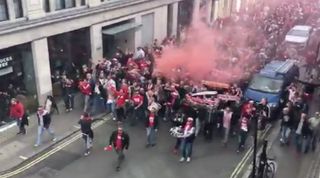 Huge numbers of Cologne fans have been spotted around Camden, Soho and Westminster as they prepare for their Europa League opener.

The Billy Goats' passionate followers have been looking forward to this game so much that they've drained all of their city's stock of English money.

The good news (so far) is there doesn't seem to have been any troublesome conduct of note.

A police statement released earlier this afternoon read: "At around 15:00 BST on Thursday, September 14, a large group of football fans gathered in Oxford Street.

"The group was at the location for about 30 minutes while they boarded public transport to travel to a football match this evening.

"They did throw bottles and let off flares, but there was no significant disorder, police were on scene and there have been no arrests. The group has now left the area."

Only 2,900 Koln fans have been allocated tickets, so the festivities could go long into the night. Just imagine the scenes if they actually win...