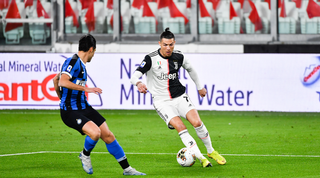 Italy has been one of the countries worst affected by coronavirus so far, with more than 10,000 people infected and 600 deaths so far. The Italian government has taken strict measures to try and limit its effects, effectively putting the country into lockdown.

All Serie A fixtures have been suspended until April 3 following a decree issued by Italian prime minister Giuseppe Conte on Monday. Some grounds, such as Milan's San Siro in the hard-hit north, have not held a game in front of a crowd since mid-February, and on Wednesday it was confirmed that Juventus defender Daniele Rugani has tested positive COVID-19.

With all sporting events there now completely suspended until April – and almost certainly beyond – the outcome of the league has been thrown into serious doubt.

Following the postponement of the first Premier League game this week – Manchester City vs Arsenal, which has been due to go ahead on Wednesday night – it's expected that further games in the UK could be affected soon. The way Serie A is decided could be indicative of how England’s governing bodies eventually approach concluding the 2019/20 season.

Here’s some of the possibilities we know are being considered.

Italian football federation (FIGC) president Gabriele Gravina has explicitly stated three potential responses to the crisis, the first of which is simply declaring the current league standings as final.

Gravina has described the possibility of Serie A not having a decisive champion as “mortifying”, so there is evidently a desire within the FIGC to avoid a whitewash of the 2019/20 season.

Arguably the fairest way of deciding the league is by allocating positions based on the current standings, which would see Juventus lift a ninth-straight Scudetto.

But that would be a tremendously difficult pill to swallow for fans of Lazio, sat one point behind Juve and in contention for their first title in 20 years.

It would also see Lecce relegated despite being just three points off 14th, having recently won three games in a row.

If that approach was echoed in the Premier League then, at the time of writing, Norwich, Aston Villa and Bournemouth would go down - even though Eddie Howe’s men are on the same points as Watford and West Ham.

Liverpool would win the title, with Leicester and Chelsea confirmed in the Champions League and joined by one of the Manchester clubs, dependent on the verdict of City’s appeal against their European ban.

A more nuanced alternative being considered by the FIGC is ending the season in its current position, but not enacting the results at the very top and bottom of the table.

In other words, the season would end as it is now, but no title winner would be declared and no teams would be relegated - the only tangible outcome carrying over to next season being the European spots.

Italian FA mulling 3 options based on when/if situation allows Serie A to start again.
1. Declare title vacant, assign Euro spots based on current standings, no relegation
2. Season over, title/relegation based on table
3. Playoffs for title/relegation
(rooting for 3 myself)— Gabriele Marcotti (@Marcotti) March 10, 2020

However, while that might suit Serie A’s three-way title race, Liverpool supporters would be understandably aggrieved if their 25-point lead at the top of the Premier League was declared null and void and their 30-year wait for a top-flight league continued.

Followers of Leeds and West Brom might have an opinion on the absence of promotion and relegation this season too.

If England’s top flight was to end prematurely, it feels more likely than not that the effect of current league positions would be enforced.

However, chiefs at the Premier League and FA have had little to say on the virus and its potential impact on the domestic game as of yet.

Another serious proposal being muted by the FIGC is the imposition of a decisive playoff for both the title, and the promotion and relegation spots.

The FIGC’s statement suggested “playoffs for the title of Champion of Italy and play-outs to decide relegation into Serie B”, although that could allow for a wide range of options.

For instance, the champion playoff could see just Juventus and Lazio battle over two-legs, or at a neutral venue, or the home stadium of the higher-placed side in a one-off game.

12 teams could still technically win Serie A, and a reasonable suggestion might see Inter and Atalanta included in a four-way seeded playoff in the style of the Championship.

Equally, SPAL and Brescia’s status as seven and nine points away from safety respectively means they can’t have too many complaints about being included in a relegation playoff.

But would Lecce be automatically involved, or have to play a pre-playoff against any number of Genoa, Sampdoria, Torino and Udinese?

Would it be a straight seeded knockout resembling an expanded version of the Bundesliga’s relegation playoff, or a mini-league decided on points with all sides facing off?

And would Benevento, leading Serie B by 20 points, not have a case for being automatically promoted?

Although the idea of playoffs is both superficially fairer and exciting for fans, these questions remain fundamentally unanswered, and would doubtlessly plague the imposition of a similar concept in England.

And if multiple games are ultimately being played, even behind closed doors, the season could arguably just finish in a more conventional manner.

The inconvenient truth is that the coronavirus continues to spread and officials, from governments to governing bodies, have little idea when it will be contained and ultimately suppressed.

Euro 2020 looks increasingly likely to be impacted this summer (though UEFA claim not to be looking at alternatives), not to mention other major sporting events like the Tokyo Olympics, the London Marathon and the Tour de France.

There are no guarantees that any European league would be able to get underway as normal at the start of 2020/21, so a solution that the FIGC is not currently touting might be to delay the present season until a date when it can be confidently completed in full, ideally with fans at the grounds.

That would be a major call - one with an unavoidable impact on next season’s calendar, and the economy of clubs and local businesses in the short-term.

But to end the season or rule the title or relegation race null and void prematurely only for the situation to quickly improve, or carry on well until next term anyway, might be misguided.

Lega Pro President Francesco Ghirelli has confirmed league chiefs in Italy only have until March 23 to present their proposals on how to end the season, which doesn’t seem like a long time-frame to make an educated ruling on how the pandemic might develop in the coming months.

The thought of living without football as we know it indefinitely is a depressing but realistic one, and putting everything on ice until the end of that period might be a deeply imperfect but preferable solution.

QUIZ Can you name every club to reach a Champions League or European Cup final?